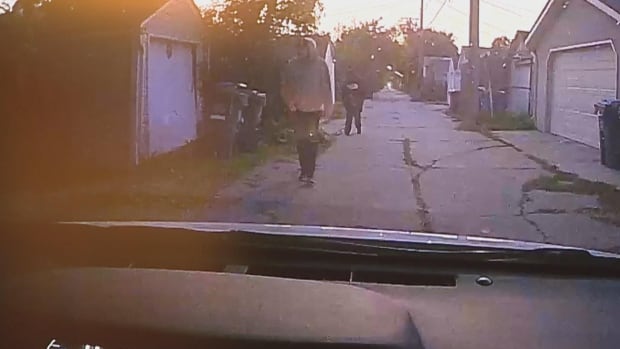 In the short video, two suspects are seen approaching a vehicle, which has a dashboard camera recording their approach. As they pass out of frame three gunshots are heard.

“We’ve decided to show this video in hopes that the public will come forward and hopefully have an identification for one or both of the suspects in this shooting,” Const. Dani McKinnon told reporters during a Friday news conference. “We know that there’s people out there who know these two guys.”

Ali, 21, was originally from Toronto. He was shot near his home on Alfred Avenue in Winnipeg’s North End on Aug. 26 last year and found between Alfred and Aberdeen avenues, just before 9 p.m. that night.

He was rushed to hospital but died two days later.

In April, police released images of a woman with a tattooed left forearm who, at the time, they believed knew something about the homicide.

McKinnon says the homicide unit has since identified and spoken with that woman. McKinnon wouldn’t reveal any other details about her identity, her conversation with investigators or any possible links with the homicide or suspects.

McKinnon says both suspects are assumed to be men at this stage.

One of two in the video released Friday is described as between 5-foot-11 and 6-foot-1, with an average build. He was wearing silver framed glasses, a light coloured jacket, dark baseball cap and dark footwear with white soles, police said.

A second suspect is described as 5-foot-6 to 5-foot-8 and obese. He was wearing a dark hoodie that has a North Face logo on front, police said. He was wearing dark pants and dark shoes in the video.

Asked whether the shooting was targeted or random, McKinnon declined to answer, saying the focus of the Friday footage release is to drum up help from the public identifying the suspects.

Asked whether police believe the suspects have remained in the city, McKinnon said she couldn’t share that information.