WINNIPEG — What started as a day of fishing turned into a lifesaving mission on an Ontario lake for a Winnipeg man.

Taylor Manning and his dog Bella headed out to Lake Lulu, located near Laclu, to do some fishing on their boat.

Once across the lake, the wind started picking up and gusting between 45 and 60 kilometres per hour, Manning said.

And that’s when everything changed.

“It was a little rough for our 12-foot aluminum boat, and we were fighting the waves, and the wind caught us, ’cause the bow was up in the air and spun us around and white caps started coming in the boat,” said Manning.

The boat started sinking, Manning said and he pulled the cord on his inflatable life jacket. But it did not work. He yelled for help and said he told himself not to panic.

“I had a daughter nine months ago and it crossed my mind, if something happens, I’m not going to be able to see my daughter again,” said Manning.

There was only one other boat out on the lake, Manning said. 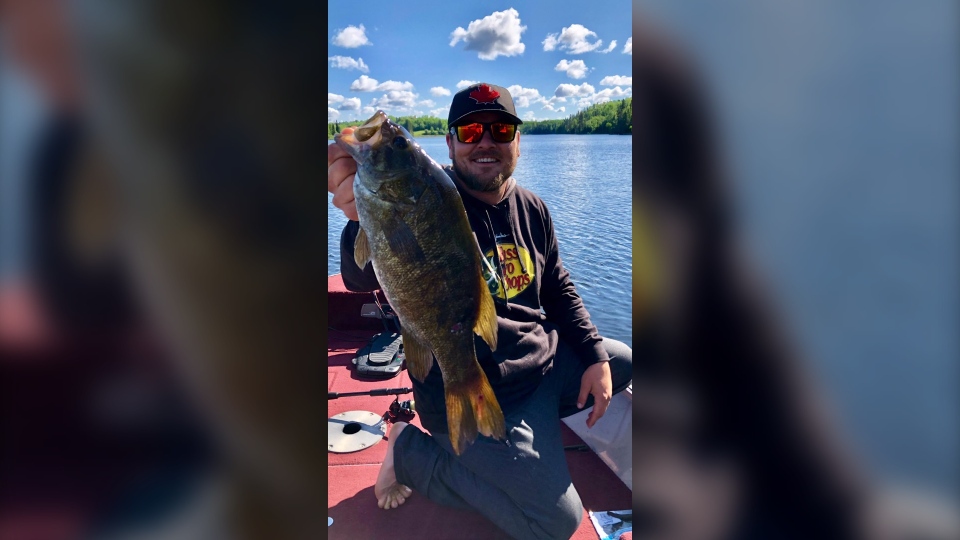 In that boat was Matthew Haarsma and his father-in-law Myron Moszynski. As the winds picked up, they were just about to call it a day, but before heading to shore , Haarsma said they decided to hit one more spot that was out of the wind. And that’s when he heard Manning’ yelling for help.

“I looked over my shoulder, but couldn’t see anything on the water and thought it was from shore. So, as I was retying, I heard help a second time, and it was getting quite a bit louder. I looked back and I could see a jerry can floating full of gas and a pail. It was definitely a panicked cry for help,” said Haarsma.

It was the longest 30 seconds he could remember, Haarsma said, as they raced towards Manning’s capsized boat.

“You don’t want to believe what’s unfolding in front of your eyes, that’s a human life right there,” Haarsma said. “When we got there, there was stuff all over, the boat was completely capsized. The only thing that was sticking out was the front bow of the boat and where you would hook up the boat if you were going to trailer it.”

He said Manning was holding a dog, Bella, who looked extremely exhausted.

“Time, when this stuff happens, is never on your side,” said Haarsma.

He could see Manning was wearing a life jacket but it still had not inflated.

“I guess his air cartridge didn’t engage at the time and he was basically hanging on to that boat for dear life, over 32 feet of water I think, we saw as we pulled up,” said Haarsma.

“I count my lucky stars that they were here, for sure,” Manning said. “But, we’re good, we are all back to normal. Bella was pretty shook up, but she’s back to herself.”

They were able to also pull the boat behind them on their way back to shore. Once everyone was onshore, Manning said people who had witnessed the boat capsize rushed to help.

“They were trying to get the water out of the boat so we could get it out of the water and they were super helpful,” he said.

He added they did not seek medical attention and he only had a small cut on his hand, which he believes was from lifting Bella onto his boat.

Haarsma, who was once a lifeguard, said from his perspective, Manning had done everything right and had been prepared for the water by wearing a lifejacket, it just did not work.

“It happened so quick, he didn’t even know what happened when I asked him what was going on,” said Haarsma.

He said a best practice is to always check equipment before heading out the water. That’s a message Manning echoes.

“Making sure all your safety supplies is working, your life jackets and whistles. I’d like to thank Matt and Myron, they are lifesavers for sure,” said Manning.

Dr. Christopher Love, water smart coordinator for The Life Saving Society of Manitoba, said everything should be checked before going onto the water, especially lifejackets. There should be no holes, punctures, or tears in lifejackets or inflatables.

“What you can do is a full pre-season check to make sure it still functional after the winter storage,” said Love.

“Make sure you don’t hear any air escaping,” Love said.

If you are on the water and something does go wrong, Love said do not panic and stay with the boat so people can see you. But depending on the circumstances, you may have to swim to shore.

He added that if you have to pull someone into the boat, do not jump into the water to help.

“That’s a much more dangerous course of action,” said Love. “You will also need, and this will vary depending on the type of craft you’re on, to make sure your rescue attempt is not going to put your craft at risk.”

For example, he said a canoe can be unstable if you aren’t distributing the weight properly.

“Generally speaking, staying low in the craft, as opposed to standing up very tall, it may require redistributing weight so you don’t flip over, and for that personal safety factor, using something between you and the person to pull them in,” said Love.