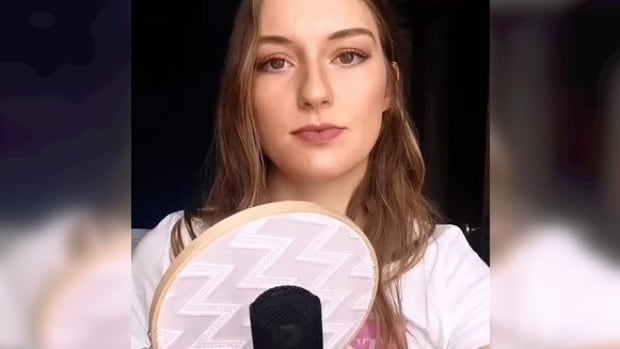 A Winnipeg nurse is turning to music to raise awareness about mandated overtime and staffing shortages in the city’s hospitals.

Stéphanie Demers, who works in St Boniface Hospital’s emergency room, rewrote the song “Double Shifts” by Montreal singer-songwriter Charlotte Cardin with lyrics that express how she and her colleagues are feeling through Manitoba’s second wave of COVID-19.

“I wouldn’t mind … if you thought of us sometimes,” goes Demers’ rendition. “I wish that you would notice me. I’ve been working so tirelessly. Been working double shifts, since you made me.”

Demers, 24, posted a video of her performing the song on Instagram and hopes to get the attention of government officials. She said many nurses are being forced to work overtime and double shifts to address staff shortages.

“It’s busy. You know, people are stressed out, but we’ve got each other as co-workers, so I’m really grateful for that. But where we’re all kind of on the verge of burning out, if we’re not burnt out already,” she said.

Demers said she’s a big fan of all Cardin’s songs, but this one stood out to her in particular as a nurse working during the pandemic.

“The line that I really like is, ‘I’ve been working double shifts, what have you been up to?’ [It] alludes to the fact that nurses, every single day, we’re working 16-hour shifts, but we feel like there’s nothing being done by our government to make sure we have the appropriate staffing,” she said.

Sometimes that happens because there aren’t enough nurses assigned to begin with, Demers said. But COVID-19 protocols have added a whole other layer to the problem.

“They have a sore throat one day, they stay home. Or their kid was exposed at school. Then, you know, they’ve been told to isolate.”

The added time and care it takes to put on and take off personal protective equipment when treating patients also makes nurses’ workloads much bigger, she said.

Demers said while there’s been talk of an outright ban on mandatory overtime, she hopes to see more nurses hired and available for shifts instead.

In a statement to CBC News, a spokesperson for Shared Health said the high number of cases in the second wave of the COVID-19 pandemic “have resulted in a surge of admissions to Manitoba hospitals and intensive care units.

“Reducing some services and postponing non-urgent procedures in order to redeploy staff to support areas and units experiencing significant surges is one strategy in place. We also continue to hire and train additional staff,” the spokesperson wrote.

Demers said while her intent in posting the song was mostly to address the government’s role in staffing shortages, she also wants to send a message to the public to keep following public health orders so that hospitals stop being overwhelmed.

“We all feel it, we all feel tired of being in the lockdown,” she said. “But just understand that it’s for a good cause, because our hospitals can’t take much more of a burden at this point.”

Once the pandemic is over, Demers said she hopes to use her musical background for something other than government lobbying.

“I would love to join a band again,” she said. “I finally got my recording studio all set up in my apartment. I’ve been meaning to do it for so long, [but] I’ve been busy.”