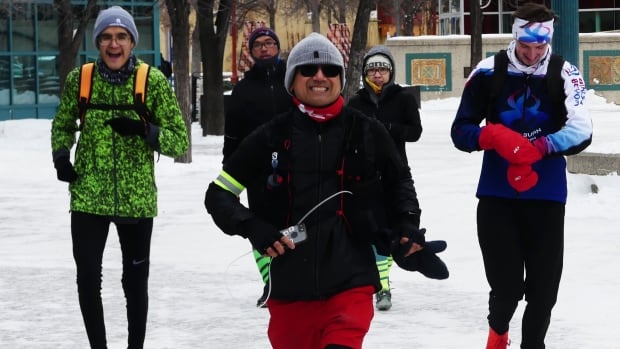 A Winnipeg man ran 100 kilometres around The Forks on Boxing Day, raising money for charity for the fifth straight year.

The tradition — a 3.3-kilometre route, repeated about 30 times — carried a little extra weight this year for Junel Malapad. This year’s Dec. 26 run marked the last of 50 50-kilometre routes done in celebration of the milestone birthday. Malapad set out in the early hours of Saturday morning and wasn’t finished until around 8:30 p.m.

“Some runners, they’re kind of crazy that way,” Malapad said. “I wanted to do something special for my 50th birthday year.”

To keep himself motivated, he chose 12 different organizations that he would spend one month of runs raising money and awareness for. In December, that organization was Siloam Mission, for which Malapad set a fundraising goal of $10,000.

And while he’s done dozens of 50-kilometre runs and other even longer races, Malapad said when strict COVID-19 shutdown measures were introduced this spring, he almost gave up on his goal just a few months into the year.

Without resources like public washrooms available at places like The Forks along his routes, the dream of clocking 2,500 kilometres of running within a year seemed less feasible.

Between physiotherapy, massage therapy, hot yoga and a chiropractor, Malapad said he was able to keep going after runs that left him feeling like he’s been “hit by a truck.”

“This year is a year of digging deep,” he said.

“It was a lot of hardship doing this thing, and it kind of parallels life right now. If I could wake up every morning and put one foot in front of the other and hit my goals, it’s really something that I could [think of] when I’m feeling like I can’t make it.”

His annual route for Boxing Day — which Malapad said he wants to change to Running Day — saw some changes, too. With public gatherings essentially outlawed during the pandemic, Malapad rented a nearby hotel room to use as a personal aid station during the run and asked people to run virtually in their favourite spots instead of joining him in person.

“I have … some friends all over the world participating in Running Day, like Hawaii, Germany, New York, from the West Coast, the East Coast,” he said.

Malapad said with the money he’s raised this month for Siloam Mission — along with a $7,500 donation from Access Storage and other donations collected throughout the year — he expects to end 2020 with more than $30,000 raised for charity.

“That would be a really special thing if we could do that and help out the great organizations we have here,” he said.