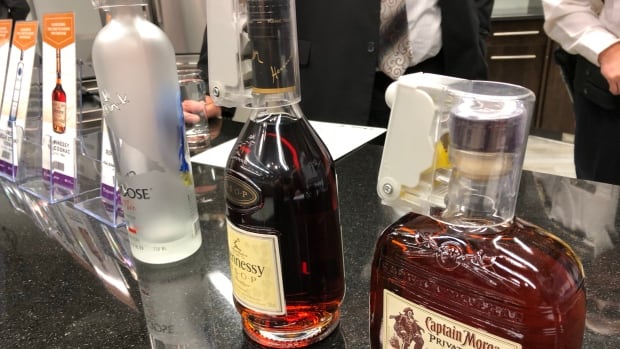 Police in Winkler, Man. seized 70 bottles of liquor when they arrested four teenagers and a 19-year-old man who allegedly robbed a liquor store and stole a vehicle.

The Winkler Police Service received a report from a local Manitoba Liquor Mart on Feb. 15, saying a number of suspects — one of whom was allegedly armed — entered the store and stole several bottles of booze.

Witnesses provided a description of the suspects’ vehicle to officers, which had been reported stolen from Winnipeg, police said.

Shortly after the robbery report came in, a Morden Police Service patrol unit spotted the suspect vehicle on a rural road and tried to conduct a traffic stop, said police.

The suspects allegedly did not pull over and a brief chase ensued, until the vehicle got stuck in a ditch, said police.

The five people inside the car, who are all from Winnipeg, were then taken into custody.

During the arrests, police seized “an edged weapon,” a collapsible baton and 70 bottles of liquor.

All five face charges of robbery with a weapon and at least one count of possession of property obtained by crime. Though each suspect has additional charges, respectively.

The 14-year-old boy is charged with the most offences, eight total, including: possession of property obtained by crime, robbery with a weapon, taking a motor vehicle without the owner’s consent, possession of a weapon for a dangerous purpose, assault with a weapon, identity fraud and two counts of failing to comply with conditions of an undertaking.

Those four were remanded in custody. The fifth suspect, a 15-year-old girl, was released on an undertaking with an upcoming court date.