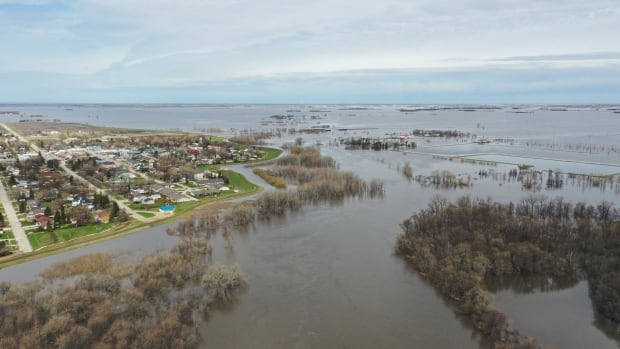 High waves could swamp communities along some of Manitoba’s largest lakes as another storm threatens to bring up to 75 millimetres of rain to the southeastern quadrant of the province, the province warns.

The province expanded its overland flooding warning Monday to include south-central Manitoba and municipalities, First Nations and parks along four lakes.

More than 50 communities and provincial parks along the southern basins of Lake Winnipeg, Lake Manitoba, Dauphin Lake and Lake Winnipegosis are at risk of heavy waves as high winds drive up water levels.

Water levels at Lake Winnipeg and Dauphin Lake are already high. The storm could bring winds  of up to 100 km/h, and that could drive up water levels on all four lakes by five feet, Transportation and Infrastructure Minister Doyle Piwniuk said Monday in a news briefing.

With severe winds, Lake Winnipeg, which is already at  715.8 feet above sea level, could exceed 720.8 feet.

Any properties along Lake Winnipeg’s south basin at elevations lower than 723 feet could be affected.

Lake Manitoba levels could reach 817.2 feet at the southern basins, exceeding the flood level and could affect low-lying areas and properties. However, most properties at the south shore are protected to 817.5 feet or higher.

Dauphin Lake is already one foot above flood stage, and properties along the souther basin could be impacted by flooding.

Piwniuk said the province has 1.5 million sandbags and about 8,000 super sandbags at the ready.

The updated forecast shows that areas along the western portion of the Red River Valley could now be affected with heavy rain starting Monday evening and continuing until Tuesday morning.

Environment Canada on Monday issued a special weather statement warning of the possibility of flash flooding and water-related washouts.

The province announced a number of provincial park closures and advisories as a result of the incoming weather system, citing a risk to people’s safety. It ordered Rainbow Beach Provincial Park on the south basin of Dauphin Lake and its campground closed until at least June 2.

Several other closures were announced:

Park visitors should check www.manitoba511.ca for road closures and potential detours before travelling to parks, the province said.