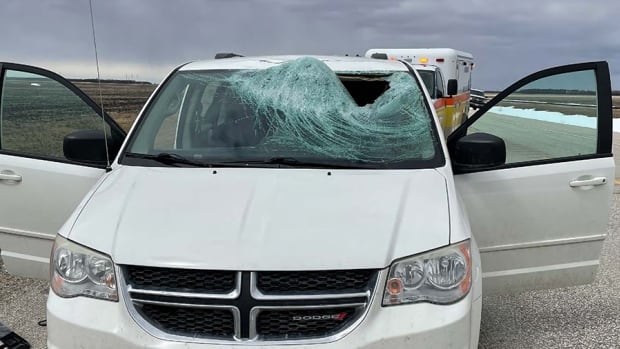 Manitoba RCMP are warning drivers to make sure their vehicles are free of ice and snow after a chunk of ice flew off a dump truck and through a nearby van’s windshield, knocking the driver unconscious.

A man and a woman were driving a van southbound on Highway 6 near the Perimeter Highway on Monday afternoon when a dump truck passed it, RCMP said in a release on Tuesday.

When the truck was about two car lengths ahead of the van, an ice chunk broke off and flew through the windshield, hitting the 68-year-old driver in the head, rendering him unconscious.

The passenger was able to grab the steering wheel and bring the vehicle to a stop before the van collided with anything.

When first responders arrived at about 1:20 p.m., the man was taken to hospital in Winnipeg, where he remains in serious but stable condition.

RCMP say drivers must ensure their vehicle is clear of snow, ice, and any other debris before heading out on the road, noting it can become a deadly projectile if it breaks loose at highway speeds.