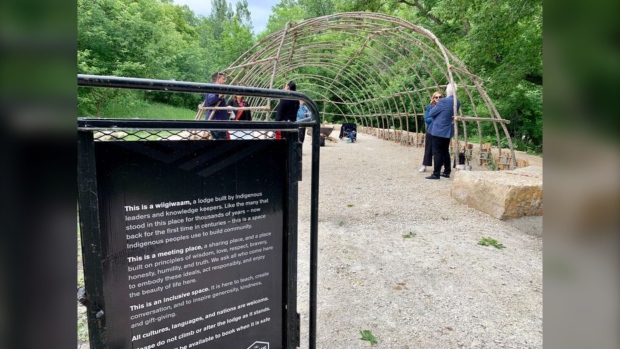 WINNIPEG — There’s a new gathering space at The Forks and it’s connecting the past to the present.

“This is what’s called a Wiigiwaam and it’s a traditional lodge amongst the Ojibwe people or Anishinaabe people,” said Niigaan Sinclair, Indigenous curator for The Forks.

The traditional lodge was built in a clearing along the bank of the Assiniboine River using tree poles from northern Manitoba and stones from southern Manitoba. The space also includes benches, tables, grandfather rocks, and traditional elements, such as a ceremonial offerings table and a fire pit.

Sinclair noted the space is about community, treaty and sharing space.

“This space is different than any other place at The Forks,” he said, noting it’s a space for all communities to come together that serves a specific purpose.

“This space is about honouring the traditions of what happens in this place, which is Indigenous-led, which is thinking about who we are fundamentally as Winnipeggers, as Manitobans, how we share relationships.”

Sinclair added the lodge is also about thinking about the sacredness of space.

“This place, for example, one of our rules, is we don’t have alcohol in this space. We also have a protocol of respect in this place, because it’s about following the laws that have always been here – how to live here the most sustainably, the most responsibly and ethically.”

The lodge is open to everyone and will be available for bookings for events, ceremonies and celebrations.

“There’s lots of possibilities, there’s more yet to come, in fact this is only the beginning,” Sinclair said.

– With files from CTV’s Scott Andersson.