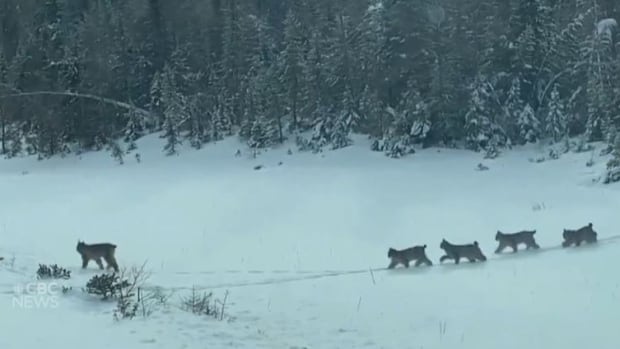 A Manitoba Hydro worker pulled out his phone when he noticed little faces peering out from the trees on his drive to work near Grand Rapids, Man., never expecting he’d capture a sight most will never see in their lifetime.

As Shaun Kirchmann watched, a mother Canada lynx and her five kittens cautiously crept out of the forest to cross Highway 6, near Grand Rapids, which is just over 400 kilometres northwest of Winnipeg.

“I was so excited. I felt incredibly … just overjoyed really. And it got me thinking of how special it was … just how much people should be aware of what we have in Canada,” he said.

Kirchmann, who works at Manitoba Hydro’s fish hatchery in Grand Rapids, was making the weekly drive home to Winnipeg. Always on the lookout for wildlife, the self-described “cat person” was near St. Martin, south of Grand Rapids, when he saw something exciting up ahead.

“I was coming around the bend and off in the distance, on the side of the road, I saw a silhouette,” he said.

He pulled over, shut off the engine, and waited for about five minutes. Eventually, there was movement in the treeline.

“It was one, two, three, I just kept seeing heads poke out of the bushes and I was just stunned. I was like, ‘Oh my gosh, that’s a family of lynx.’ But I’d never heard of this many lynx being together,” he said.

“Mama just sort of comes up to the road and her babies are behind her, and the ones that are a little braver following her along, and … then they make the crossing.”

Kirchmann said some of the youngsters were more apprehensive about crossing, but quickly caught up to their mom.

“They just went into the trees and they vanished. And I mean, I count myself so lucky because they vanished from my sight and I I know it could be another three years, it could be my whole career that I don’t see something like that again.”

He said he found the experience amusing because the way the animals moved reminded him of his two kitties at home.

“I hope that this video kind of raises awareness of these elusive animals that are beautiful and should be protected,” Kirchmann said.

“I hope they’re all doing well. That’s a lot of hungry mouths to feed, but I couldn’t resist stopping to check out such a reclusive animal.”

The CBC shared the video with Jim Roth, an associate professor at the University of Manitoba who has studied lynx population dynamics and diets.

He said lynx can produce litters of up to eight kittens, with the average number of young fluctuating with the abundance of prey. The lynx’s favourite food-source is snowshoe hare, he said, and the population cycles of the two species are closely linked, meaning they rise and fall together about every 10 years.

⚠️ Caution: cat crossing ⚠️ Our employee Shaun Kirchmann filmed this lynx litter on the highway to Grand Rapids after he saw a bunch of little heads peeking from the trees 😻 <a href=”https://t.co/hh3ct6PKj9″>pic.twitter.com/hh3ct6PKj9</a>

He said the animals in the video appeared robust and in great shape. While they’re endangered in the United States, their populations in Canada, especially in northern parts of their boreal habitat, are doing fine.

Kirchmann hopes his video sparks some awareness of the reclusive cat and serves as a reminder to drivers.

“I think it’s good to see that they’re hesitant of crossing the highway because it’s definitely a dangerous trip. I think it’s important that people are aware of the wildlife on the road. I just wanted to make sure they were okay and they got across and then off we went.”

The Wild Canadian Year team wants to capture images of wild Canadian lynx hunting rabbits. But the super elusive cats are extremely difficult to find and to film. 6:07