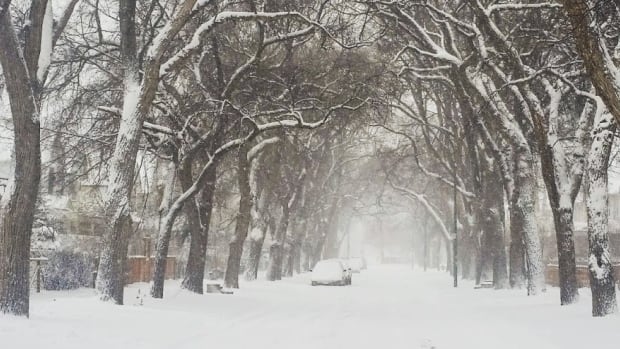 Manitoba is bracing for a winter wallop that is threatening to bring as much as 25 centimetres of snow and blizzard conditions to parts of the south.

What began as a storm watch on Monday, before being upgraded to a warning later in the day, is now moving up to the next level.

The system will track along the international border beginning Tuesday and continue into Wednesday, bringing heavy snow and strong winds to southern Manitoba.

Environment Canada has issued a range of alerts across the south, from a blowing snow advisory to winter storm warnings and blizzard warnings.

CBC meteorologist John Sauder said the heaviest snowfall — 15-25 centimetres — is expected north of the Trans-Canada and Yellowhead Highways, in areas like Gimli and further into the Interlake region. The Riding Mountain area could see closer to 30 cm.

South of the Trans-Canada, the amounts are likely to be less, around 10-15 cm. But that’s also where things could be the nastiest.

“It’s not so much about the amount of snow. It’s about what the wind will do to the snow and what that will do to create some really, really hazardous driving conditions,” Sauder said.

Winnipeg, Brandon and several other areas are under the blowing snow advisory, where the wind is expected to gust up to 70 km/h. Combined with the fresh snowfall, that could suddenly reduce visibility to near zero.

Areas further south — Morden, Winkler, Altona, Morris, Steinbach, St. Adolphe and Emerson — are all under the blizzard warning with gusts, developing closer to the evening and overnight, forecast to be around 80 km/h.

“We are expecting visibility to be very poor, 400 metres or less, and for over four hours. That’s the criteria for a blizzard warning,” Sauder said.

Those conditions are likely to continue until late Wednesday afternoon before the winds begin to moderate.

Environment Canada is urging people to consider postponing non-essential travel until conditions improve. Highways, roads, walkways and parking lots could be difficult to navigate due to accumulating and drifting snow.

The forecast beyond the stormy weather, as Christmas gets closer, can be summed up in a single word, Sauder said.

Temperatures are expected to drop as an Arctic cold front pushes in.

Thursday’s high for Winnipeg will be about –23 C, Sauder said.