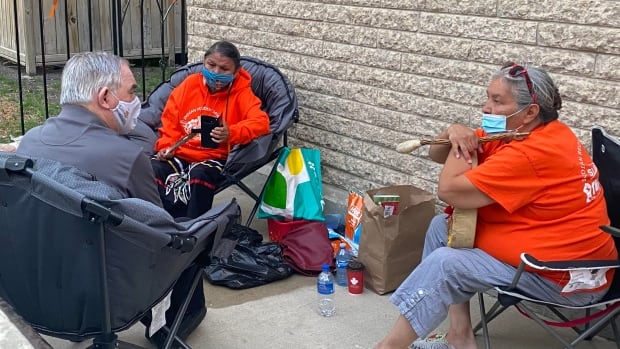 WARNING: This story contains details some readers may find distressing.

A residential school survivor finally had a face-to-face meeting with the leader of the Catholic Church in Winnipeg on Friday night.

But after 10 hours of waiting on the sidewalk outside St. Mary’s Cathedral, Gerry Shingoose said she was disappointed by what Archbishop Richard Gagnon said — and didn’t — when he finally spoke with her around 9 p.m.

“I shared my heart and soul with him, and I felt that he was listening to me. But his response was almost like … he already knew what he was going to say,” said Shingoose, who was forced to attend the Muscowequan Residential School in Saskatchewan from 1962 to 1971.

“He didn’t get to the reality of residential school. I don’t even think he understood our experience. He needed to listen and he already knew what he had to say. I didn’t find it truthful or honest and genuine.”

Shingoose said she told Gagnon about the horrific abuse many children experienced at residential schools, many of which were run by the Catholic Church.

She also explained how her own experience at residential school took her cultural identity away from her, and brought up how many children died at the schools — including an estimated 215 whose remains were recently discovered at the site of the former Kamloops Indian Residential School in British Columbia.

“Every time I’d bring up the little children, he’d retract his response and switch it to something else,” Shingoose said.

“He didn’t speak from the heart.”

As she waited outside the church near Bell MTS Place, Shingoose received some encouragement from Montreal Canadiens goalie Carey Price.

Price, whose mother is the former chief of the Ulkatcho First Nation, stopped to speak with Shingoose before Friday’s playoff game against the Winnipeg Jets.

Shingoose said she wanted Gagnon to deliver a message to Pope Francis that the church must admit its role in Canada’s residential school system, including the harm done to children who died and to survivors.

She said she believes progress is possible but admitting that truth needs to be the church’s next step forward.

“You need to have truth before you have reconciliation,” she said.

“Tonight I shared my truth but he didn’t share his truth or the Catholic Church’s truth. They have so much truth that they’re keeping secret.”

After the meeting, Gagnon said he spoke with Shingoose about the importance of supporting one another and moving into the future.

“The example of the children in Kamloops makes a lot of people aware of this, and from that we’re all praying that good fruit will come,” Gagnon said.

“People have good hearts. They have good intentions. And so tonight was a very beautiful experience filled with hope.”

While Shingoose didn’t get the reaction she was hoping for from Gagnon, she said her work, and that of other residential school survivors, is far from over.

“It’s not going to stop here,” she said.

“Two hundred and fifteen lives, little spirits, were taken. And I don’t think they’ve seen the seriousness of that.”

Support is available for anyone affected by the lingering effects of residential schools, and those who are triggered by the latest reports. The Indian Residential School Survivors Society (IRSSS) can be contacted toll-free at 1-800-721-0066.

A national Indian Residential School Crisis Line has been set up to provide support for former students and those affected. Access emotional and crisis referral services by calling the 24-hour national crisis line: 1-866-925-4419.