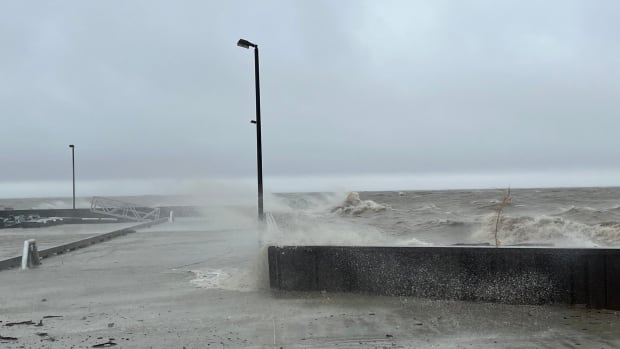 The rural municipality of St. Clements held an emergency meeting Tuesday about the rain and wind hammering the area.

Meanwhile, the City of Morden has asked residents not to run their taps, dishwashers and laundry machines in an effort to ease the load on their sewer systems, after the community received more rain than any other area of the province in the last 24 hours.

Environment Canada has issued rainfall, wind and snowfall warnings across parts of southern and northern Manitoba, as a powerful Colorado low is bringing heavy rain and strong winds to southern Manitoba.

The areas covered by the warnings are already struggling with flooding caused by the massive amount of rain that has fallen this spring, including the Interlake and the Red River Valley.

St. Clements, north of Winnipeg, has sent out notices to as many as 40 properties to be prepared to get out if Lake Winnipeg goes up too much. The Red River, which is still flooding, runs along the west side of the rural municipality.

“If anything happens, and with this wind and rain, I’m just not sure where [the water’s] going to go,” Mayor Debbie Fiebelkorn said.

“The water hasn’t even receded from the spring runoff in here.”

Conditions are similar to 2010, when a record-breaking low-pressure system known as a “weather bomb” hit the area, bringing strong winds, Fiebelkorn said.

An excavator has been moved to the northern part of the municipality, along the southeast shore of Lake Winnipeg, and a local quarry has been contacted about hauling materials such as sand and gravel to help reinforce dikes, if needed.

Tyler Freeman, the municipality’s emergency measures co-ordinator, said they’ve moved heavy equipment to the Grand Marais area as they keep an eye on dikes there.

Meanwhile, in the 24-hour period up to about 7 a.m. Tuesday, Morden received more rain than any other region in the province, with 81.5 millimetres.

Morden Mayor Brandon Burley said the ground was already saturated, but on Monday the rain started coming down in sheets.

“We thought it was hail at one point, but it was actually just raindrops are so big, and almost balls of rain,” he said.

Southeastern Manitoba is expected to receive less rain, between five and 10 millimetres.

Wind warnings also have been issued for parts of southwestern Manitoba, particularly in the areas between the Saskatchewan border and the western shore of Lake Manitoba, and as far north as the southern shore of Lake Winnipegosis.

Drivers should watch for objects blowing across roads.

The wind and rain are expected to diminish later in the day on Tuesday as the weather system moves east.

Up north, a rainfall warning has been issued for Churchill, on the shores of Hudson Bay. Multiple waves of precipitation are expected over much of this week, with the heaviest rain on Tuesday into Wednesday.

A snowfall warning has been issued for Tadoule Lake, almost 1,000 kilometres north of Winnipeg. Between 20 and 40 centimetres is expected, from Tuesday evening until Friday. Winds gusting up to 80 kilometres per hour are also expected Tuesday evening.