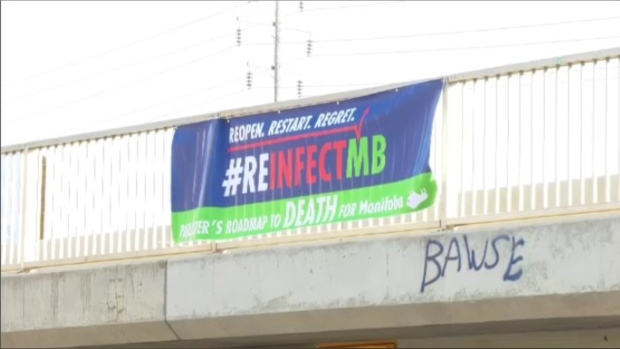 WINNIPEG — A new banner with the words ‘Reinfect MB’ has been placed on Winnipeg’s Portage Avenue.

The banner is a play on the province’s #RestartMB billboards, but instead says ‘Reopen. Restart. Regret. #ReinfectMB. Pallister’s Roadmap to Death for Manitoba.’

A group is claiming responsibility for the banner, which is hanging on a train bridge on Portage Avenue near Empress Street, but is asking to remain anonymous.

The group said there will be more pop-up art around Winnipeg in the coming days.

This banner went up as Manitoba reached 123 deaths related to COVID-19, as well as 5,676 active cases.