Kelsey Wog is relieved she can stop planning to move in order to pursue her goal of making the Olympic swimming team and competing in the Tokyo summer games.

Wog, a dominant swimmer from Winnipeg, was training in Calgary, Alta., when all of Manitoba went into red level, or critical, COVID-19 restrictions on Nov. 12. When she heard of the restrictions, Wog realized it was necessary, but the implications of the partial lockdown didn’t hit her until she returned.

“When I was coming home, I was like, ‘Uh oh. What am I going to do?'” said Wog, who had to watch competitors in other provinces train while she couldn’t because sports facilities were closed.

Wog worried that she’d have to pack up her life and move elsewhere, she said. But then the Manitoba government announced in Tuesday’s COVID-19 bulletin that the public health order was amended to allow athletes training for the 2021 Olympic Games in Tokyo to access indoor sporting facilities.

“I’m so grateful that I can train here,” said Wog. “I’ve got my home coach that I’ve trained with basically all my life. My parents are here, and they’re here to help and support me. I get to sleep in my own bed, eat my own food. It’s huge. It’s such a relief.”

Olympic and Paralympic competitors and hopefuls training for the summer games may train at indoor sporting facilities specified by Sport Manitoba, assuming they comply with health requirements and protocols.

Only the athlete, coaches and “support personnel authorized by Sport Manitoba,” and “staff required to operate the facility” are allowed in a facility during training, according to the public health order.

“High-performance athletes have been training their whole lives for the chance to compete in an Olympic games, which is an opportunity that only comes around every four years,” the provincial government said in an email through a spokesperson.

The amendment affects “less than 10 people” in Manitoba, and can be accomplished safely, the spokesperson added.

Factoring in coaches and trainers who would be attending training sessions, about 15 to 20 Manitobans are privy to the indoor athletic facilities, said Jeff Powell, executive director of Canadian Sport Centre Manitoba, which supports current and aspiring Olympic and Paralympic athletes training in Manitoba.

“We’re excited that those athletes will have an opportunity to continue to prepare for the games, and understand that it’s a big responsibility on the facilities and the coaches, the people working with them to make sure they can do it safely,” said Powell, who represented Canada at the 2004 Olympics in Athens, Greece.

When the province initially locked down, athletes were able to get some training equipment into their homes, while others have been able to travel elsewhere for competition or training, he said. “But it’s been very irregular, very piecemeal and far from ideal.”

The Tokyo games open July 23, 2021, giving athletes less than seven months to train. But some athletes, including Wog, also have competitions prior to the games that decide whether they go to the Olympics or not, Powell noted.

This makes the recent change in Manitoba “tremendously significant,” as athletes can train in appropriate environments without having to deal with the “enormous burden” of leaving, he said.

Wog didn’t grow up dreaming of Olympic stardom. But when she finished just shy of qualifying for Team Canada in 2016 as a Grade 12 student, Wog realized the Olympics were within her reach and she has worked toward that goal ever since.

Wog is coming off an impressive 2019-20 season with the University of Manitoba Bisons, breaking several U Sports records, earning four medals at nationals and being named the U Sports female athlete of the year.

The Canadian Olympic Trials are scheduled for April 7-11, 2021, in Toronto, Ont. If Wog finishes with a top-2 time in her events, then she will represent Canada in Tokyo — assuming the games go ahead.

Wog travelled to Budapest, Hungary, last fall to compete in the International Swimming League, then flew to Calgary in November to train with members of the national swim team. 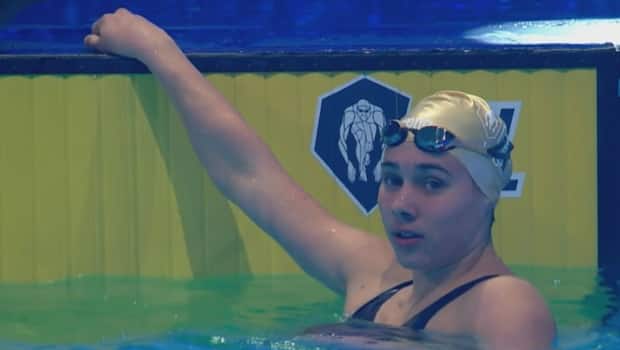 But she hasn’t been able to train in the pool for about two weeks since coming home, she said, so there is no holiday break for her.

“I’ve taken so many breaks and had so many little periods of time off, I’m just going right through,” Wog said. “I’ve got to train.”

Right now, Wog is trying to get back in shape. But her goal for the Olympic qualifiers in April is to be near — if not at — her best, make Team Canada, then improve over the summer, she said.