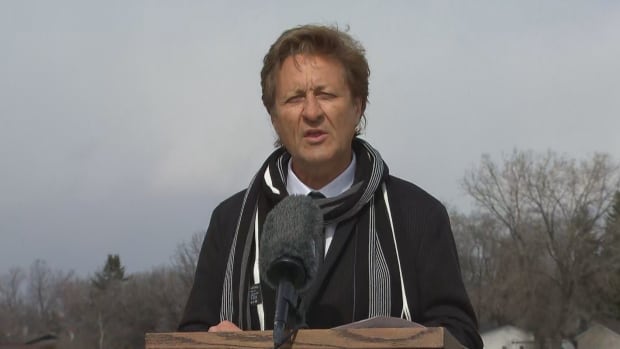 With vehicles and transport trucks zooming behind him, Manitoba Infrastructure Minister Ron Schuler announced construction of a new $2.5-million service road off the Perimeter Highway Tuesday, intended to make a western section of the highway safer for motorists.

The Manitoba government will work with the RM of Headingley to build the new road as part of the province’s South Perimeter Safety Plan, developed in 2018 to address safety issues at Perimeter Highway intersections that are controlled by stop signs.

“That vehicles would be pulling out cold, or turning right [off or onto] the Perimeter … [the fact] we think that this is somehow even acceptable in today’s age is surprising,” Schuler said at a news conference, noting the amount of traffic behind him, as well as the size and speed of the vehicles.

“It is time that we make the Perimeter Highway safer.”

The safety plan included closing two direct access roads from Caron Road, which is in the rural municipality of Headingley, to the Perimeter Highway.

One access point has already been closed. The other will close after Rockall Road — the new service road — has been built, the province said Tuesday.

The RM of Headingley will manage and deliver the project, and will own Rockall Road, from Roblin Boulevard to Wilkes Avenue, once it’s built, a news release from the province said.

Rockall Road will give two access points to the South Perimeter via Wilkes and Roblin.