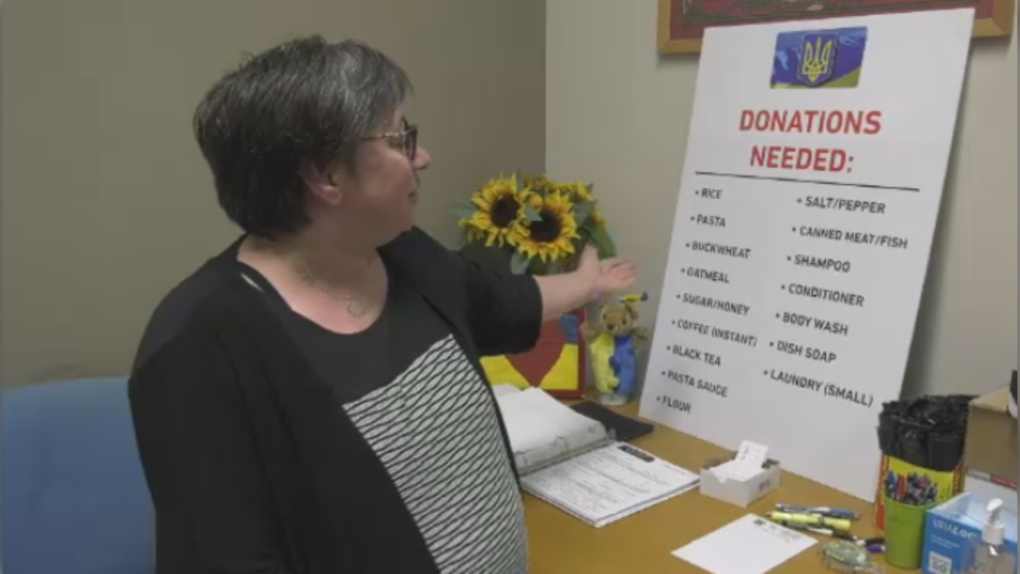 The Ukrainian National Federation (UNF) – Club Winnipeg has been helping Ukrainian refugees who have arrived in the city since the war with Russia broke out, and it is calling for donations so it can continue to provide assistance.

Beverly Stepaniuk is with UNF and said when refugees arrive in Winnipeg, they take a shuttle to their facility, where they register and receive donated items such as clothing, comfort items and food.

As more people arrive from Ukraine, the UNF continues to put calls out for donated items.

“What we really need is our non-perishable food items,” said Stepaniuk.

Other non-food-related items include shampoo, conditioner, and dish and laundry soap.

Stepaniuk said Manitobans have been extremely generous with donations of clothing and furniture, so much so that they don’t have any more room at this time for those items.

“If you have used clothing or furniture, please consider another organization to donate to because we know the need will be in the community for other refugees.”

So far, Stepaniuk said they have registered 290 refugees since they opened in February, but she knows their reach has helped many more than that.

“That’s not including the children that are registered as well. We estimate close to a 1,000 people our centre has helped.”

On Tuesday, a group of Ukrainians arrived at the UNF centre. Lev was one of the arrivals and said he feels safer in Canada, but noted he still worries about his family back home.

“My father is still in Ukraine,” he said, noting his father wasn’t able to leave the country.

He added he is thankful for the support he has received so far.

“I only have a small bag with me. I only have one (pair) of jeans with me…I really need to take some clothes.”

Olek also arrived on Tuesday and said he is very appreciative to be in Winnipeg and Canada.

“We didn’t expect anything…We just thought we would come here and try to survive on our own. We were very surprised at what a great welcome it was in Winnipeg,” he said.

He said now that he has arrived, he plans on looking for a job in IT, specifically programming.

Ivan arrived in Winnipeg a month ago and is now volunteering at the UNF while he looks for a job.

He is from Crimea and said he felt unsafe when the war broke out. He thought he would either get arrested for speaking against the war or drafted into the Russian army.

“So I applied for the Canadian program and got approved,” he said. “Canada is a very welcoming place. I stayed in a hotel for a couple of weeks.”

He said he now has an apartment and is hoping to find work.

“I just didn’t feel (Ukraine) was a place to be there anymore with everyone that is going. It just hurt me as a Ukraine…I just couldn’t stay there anymore.”

If anyone has non-perishable items to be donated to the UNF, Stepaniuk said people can drop them off at 935 Main Street.