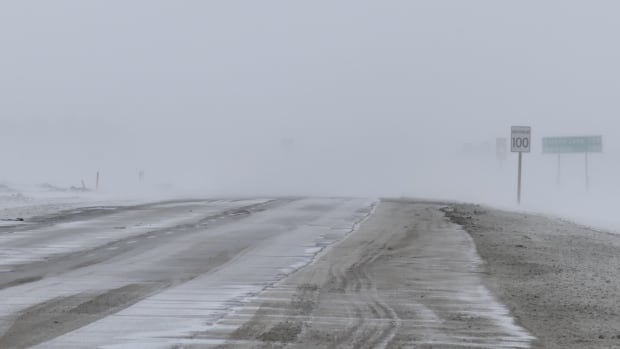 A two-day snowstorm that clobbered Manitoba has finally moved out but it has left icy, dangerous roads in its wake and forced many school closures on Wednesday.

Winnipeggers have been left to dig out from 15-25 centimetres of snow that blanketed what had been clear, dry ground.

To the west of Winnipeg, Portage la Prairie and Brandon had 12 cm of snow, while Virden received 10 cm. Further north of there, Minitonas got 20 cm.

A spokesperson with Environment Canada believes the Riding Mountain region received closer to 30 cm but the weather agency has been unable to get any measurements from the area. It relies on volunteers to report snowfall amounts.

No measurements have come in from central Manitoba or from the Pinawa, Lac du Bonnet or Beausejour areas.

Multiple collisions on <a href=”https://twitter.com/hashtag/MBHwy1?src=hash&amp;ref_src=twsrc%5Etfw”>#MBHwy1</a> outside Portage la Prairie. <a href=”https://twitter.com/hashtag/rcmpmb?src=hash&amp;ref_src=twsrc%5Etfw”>#rcmpmb</a> on scene and have put up the highway barricades. No traffic getting through. Extremely icy road conditions in the area as well as on the Trans-Canada between Headingley and Elie. Slow down and drive safe.

The colder temperatures have turned some of the snow into ice and crust.

The province is reporting many highways are covered or partly covered with snow, while the conditions have shut down the Trans-Canada Highway between Virden and the Saskatchewan border.

Multiple crashes Tuesday night and into Wednesday have also led to closures on several other sections of highway.

The following school divisions have cancelled classes for Wednesday:

Temperatures in communities along the storm’s swath — in central and southern Manitoba — will stay close to the freezing mark on Thursday and begin to rise over the next few days as the sun returns, Environment Canada forecasts.

The normal high in Winnipeg for this time of year is 10 C but it’ll take a bit of time to get back there.

Environment Canada is forecasting a high of 4 C on Thursday, 6 C on Friday and 9 C on Saturday. Temperatures dip back down to 4 C again to start the new week.