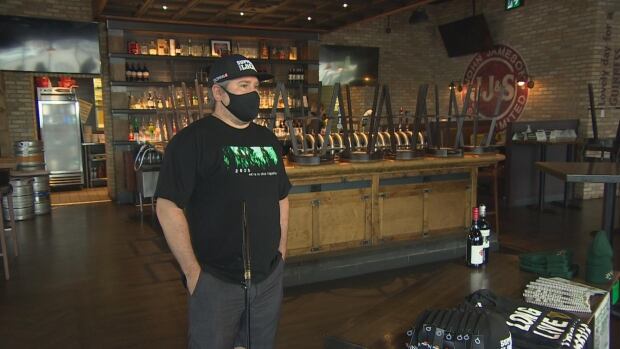 Business owners are bracing for more details on Manitoba’s reopening plan and hoping for more supports to help them get through another summer of restrictions.

The provincial government laid out a phased reopening plan on Thursday that would allow businesses to open at 25 per cent capacity by July 1, as long as 70 per cent of all Manitobans age 12 and older have received their first COVID-19 vaccine dose and more than 25 per cent have their second.

At that capacity, Fionn MacCool’s owner Jay Kilgour says, he can’t make a profit, and might actually be more expensive than operating on a take-out only basis.

And that’s assuming the province reaches its vaccination target.

“I was in shock,” Kilgour said.

“I was hoping today that I would be able to send a message out to my staff and let them know when they’d be coming back to work and I can’t really do that right now.”

His restaurant’s 90-seat patio will be limited to 22 people, and his 164-seat restaurant will fit 41.

He needs a minimum of 50 per cent to make a profit, he says, but that possibility might not come until the August long-weekend, and by then he will have lost more than half of his summer.

The reopening plan also came as a disappointment to Colors Beauty and Wellness owner Joanne Rempel.

“I’m sure government is expecting me to say im happy about it, but I’m incensed and insulted by it,”  she said.

The province has provided no evidence to show that virus transmission is happening in salons, she said.

Nevertheless, she says, she’s willing to guarantee that all of her staff will be vaccinated before returning to work. All clients are pre-screened, distanced, and her business doesn’t accept walk-ins.

“You can go and buy a geranium, or you can buy a great pair of Gucci shoes, and I love those businesses, don’t get me wrong.” she said. “But you can do those as essential services, but you can’t come and experience a haircut?”

According to the Canadian Federation of Independent Business, just 30 per cent of Manitoba businesses are operating at normal revenue right now.

“There’s so many businesses right now that are struggling. They are going behind every single day, even if they’re open. And I expect that, even at 25-per-cent occupancy”

Subsidies will be needed, Alward says.

“We’ll continue to offer as much as we can — supports both during this pandemic and in the recovery period, just as we did last year when we were recovering from that first wave — to our small business community moving forward,” he said.

Kilgour says he will still open at 25-per-cent capacity, even if it comes at a loss, because his staff need the work.

“You know, it’s better than the chairs up the staff at home, so we will open at 25 per cent but it’s gonna be really tough,” he said.