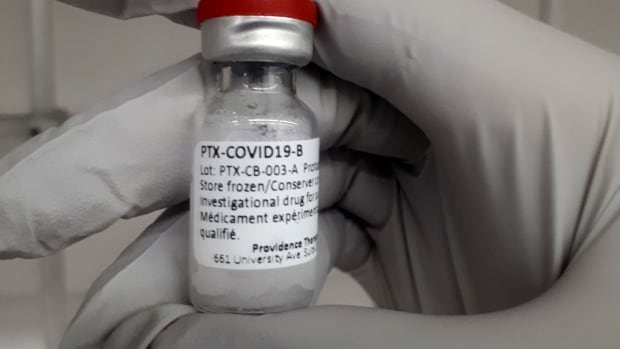 Manitoba’s government says its deal with a Canadian company promising to develop a COVID-19 vaccine may not be affected if the head of the company makes good on a threat to move its operations out of the country.

In February, the provincial government announced a deal with Providence Therapeutics, a Calgary-based pharmaceutical company, for a made-in-Canada COVID-19 vaccine. The vaccine, which hasn’t been approved by Health Canada, was supposed to help Manitoba gain some independence from vaccines manufactured in other countries, said Premier Brian Pallister at the time.

But on Friday, Providence Therapeutics CEO Brad Sorenson told CBC News he’s working on moving operations overseas because he’s tired of the “runaround” from the federal and provincial governments.

Providence may be the developer of the vaccine, but manufacturers Northern RNA and Emergent Biosolutions are Canadian partners integral to the vaccine production. A finalized agreement would still allow vaccines to be produced in Emergent’s Winnipeg facility, said Blake Robert, spokesperson for the premier.

Robert also said Manitoba’s agreement with Providence Therapeutics hadn’t been finalized and no payments were made.

But according to the province’s contract disclosure’s website, the Manitoba government agreed in February to pay Providence $36 million for the vaccine in 2021.

That included a “credible and non-refundable” payment up front of $7.2 million, according to a summary term sheet of the deal signed Feb. 10.

The first 200,000 doses produced were supposed to be guaranteed for Manitoba, then the rest would be allocated on a “pro-rata basis” with other provinces, the term sheet says.

If Providence moves, however, Canadians will not be prioritized for the vaccine, Sorenson said.

The news makes Pallister look like he rushed the deal for a political win and now Manitobans will be “ripped off,” said Mark Wasyliw, finance critic for the Opposition NDP, in a statement to news media.

The money spent on the Providence deal could have been put toward the vaccine rollout, Wasyliw added.