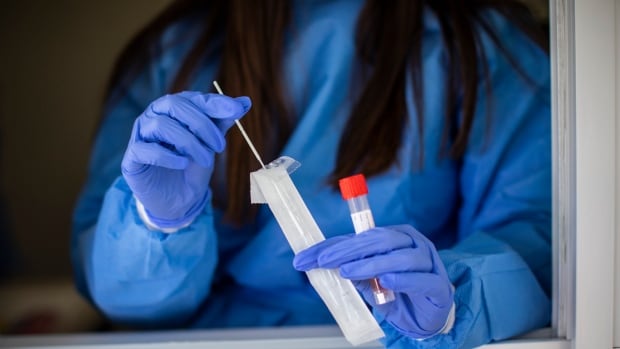 Roughly one in every four COVID-19 cases in Winnipeg is now caused by a more contagious coronavirus variant, Manitoba’s chief public health officer said on Thursday, as the province reported its first known death linked to one of the strains.

Dr. Brent Roussin revealed the “concerning” statistic as the province announced a man in his 70s from the Winnipeg health region who died in late March had the B117 variant first identified in the U.K.

The sequencing results that determined the case was a variant came back after the man died, Roussin said on a call with reporters.

As the proportion of variant cases within Manitoba’s COVID-19 caseload rises, the province is screening every positive swab it can for the deadlier strains, Roussin said.

There may come a time when variant cases make up an even bigger chunk of Manitoba’s total cases — but the province is working to try to hold off that shift.

“There’s no real magical number, but at some point if that proportion of cases gets to something around that 50 per cent [mark], then even screening is not all that important, right? We just know what is our predominant strain,” Roussin said.

“This is why we really have the aggressive case and contact management. It’s why we didn’t further our progress with substantial opening at this point.… We’re going to continue screening, but right now, I think this is concerning.”

The province’s pandemic rules will be extended until April 30.

People living in personal care homes will be allowed two visitors at a time outside and one at a time inside, the province said in a news release.

Thirty-seven of those cases are the B117 variant, with 32 of them in the Winnipeg health region, two each in the Interlake-Eastern and Prairie Mountain health regions and one in the Southern Health region. As of Thursday, that strain makes up nearly 90 per cent of Manitoba’s total 339 known variant cases.

The other three variant cases announced Thursday are in the Winnipeg health region and have not yet been categorized, the province said. That brings the total number of unclassified variant cases in the province to 21, while the number of B1351 cases — a coronavirus strain first seen in South Africa — remains at 20.

As of Thursday afternoon, 89 of Manitoba’s variant cases were still active and 249 people had been deemed recovered, according to the province’s online variant dashboard.

At least 18 people diagnosed with the more infectious strains have been hospitalized in Manitoba, with patients ranging from their 20s to their 90s, a provincial spokesperson said on Wednesday. Six of them were younger than 50.

Most of the variant cases identified in Manitoba so far have been in the Winnipeg health region. The Northern Health Region remains the only region not to have reported any variant cases.

Close contact with a known case appears to be the driving factor behind most of Manitoba’s known variant cases, the dashboard says.

More than one-quarter of the province’s reported variant cases are still classified as unknown acquisition — meaning contact tracers haven’t been able to figure out where the person got it.

Sixty of the new COVID-19 cases are in the Winnipeg health region, the province said.

The latest COVID-19 deaths, which bring Manitoba’s total coronavirus-linked fatalities to 946, were all in the Winnipeg health region. A man and a woman in their 70s, with the latter linked to the outbreak at Holy Family Home, and a woman in her 80s have died.

Manitoba’s five-day test positivity rate remains 4.8 per cent, the province said, while Winnipeg’s rate rose to 4.6 per cent from 4.4 on Wednesday.

A COVID-19 outbreak has been declared at the Boissevain Health Centre and Evergreen Place Personal Care Home, the province said.

There are now 141 COVID-19 patients in hospital in Manitoba, the province said, up one since Wednesday; 33 of those people are in intensive care, also up one.

There have now been 34,793 COVID-19 cases identified in Manitoba, including 32,781 people deemed recovered. Another 1,066 cases are still considered active, the province said.

There were 2,027 COVID-19 tests done in Manitoba on Wednesday, bringing the total number of swabs completed in the province to 596,872 since early February 2020.