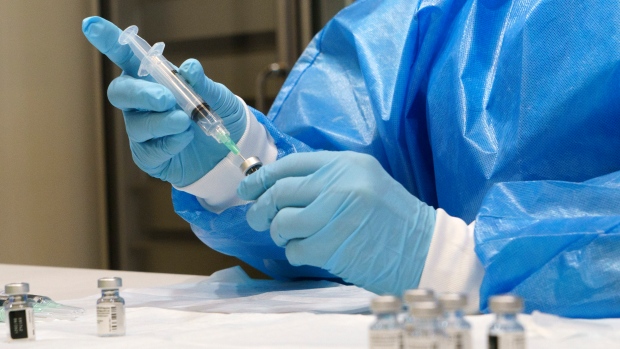 WINNIPEG — Less than 24 hours after Manitoba health officials announced a change to the vaccine rollout plan, the medical lead of the vaccine task force provided some more details.

Dr. Joss Reimer, the medical lead of the Vaccine Implementation Task Force, said the province has made progress on protecting the most vulnerable, and with variants on the rise, now is the time to change the approach.

“We know the (the variants) are more contagious. We know that they can be more severe, even for younger people. So we do need to continue to adapt, based on what we are seeing,” she said.

Reimer noted this change is consistent with advice from the National Advisory Committee on Immunization.

The new rollout plan will see all people in high-risk areas over the age of 18 be eligible as well as frontline responders such as police and firefighters.

Reimer was asked on Friday what would be considered a high-risk area in the province and how they are making these decisions.

“We don’t have enough doses to do an entire health region,” she said, “The team right now has membership from rural, remote and urban health experts. So they are looking at postal codes, health districts, they’re looking at municipalities, to ensure the evidence they are drawing on is strong and that the way we can communicate with Manitobans makes the most sense.”

She noted that at this point she doesn’t have the exact idea of what these areas will look like but added the rollout will still have to match the supply being provided by the federal government.

“I can guarantee that there will be some measurement of the number of cases or the severity of cases in certain geographic areas.”

WHAT CONSTITUTES A FRONTLINE RESPONDER?

The doctor was also asked what frontline responders will be included. Information from the province yesterday indicated police and firefighters, but positions like teachers were listed under the high-risk area category.

“Our team of experts is working on that right now to see what the data shows about what job categories make the most sense to include initially. So certainly, we want to focus on jobs where people are in these high-risk areas, are potentially exposed to the virus more than other people.”

Reimer said when these people are finally eligible, they will be able to book appointments just like everyone else has been able to.

“At the same time, we are always looking at ensuring that there is an appropriate access to a variety of different mechanisms for people to be immunized and we will continue to that.”

When it comes to the age-based eligibility, Reimer said it will slow things down a little bit, but once it hits a younger age, it would speed up because many would have already been vaccinated.

Reimer said the change in the rollout doesn’t mean it will slow down while the province waits to finalize everything moving forward.

“We are continuing to administer all of the doses that we have available to us to the folks who are already eligible.”

On Friday, Manitoba once again updated the age eligibility for booking a vaccine. Currently, individuals 57 and older, and First Nations people 37 and older, can book an appointment for a COVID-19 vaccine.

Reimer said Manitobans will learn more about the province’s plan on April 21.