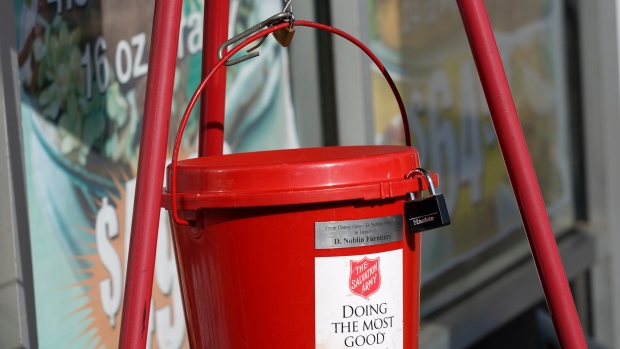 WINNIPEG — Manitoba charities say they are falling short of annual goals amid the COVID-19 pandemic.

Traditionally, the holidays are known as the giving season, when charities like the Salvation Army receive a large portion of their donations, but that didn’t happen this year.

“2020 has definitely been a struggle, not only for many individuals out there but organizations as well trying to look for donor dollars,” said Major Jamie Rands, public relations for the Prairie region of the Salvation Army.

With no traditional kettle campaign, Rands said the Salvation Army in Manitoba has only received 10 per cent of its $530,000 goal.

“We’re not seeing the figures as we normally would have if we had that volunteer standing there greeting someone,” Rands said.

However, that is not the only issue.

Rands said new kettles with tap technology, which were introduced by the charity this year, could not connect in Manitoba and Saskatchewan. These were the only provinces to experience the issue in a year when the need has been especially great.

“More and more people are continually coming to us this year because of how they’ve been impacted,” Rands said.

He noted fewer donations to the Salvation Army could mean fewer services are available for those who need them the most.

The pandemic’s impact is being felt within other organizations as well.

Camp Arnes is a summer camp that heavily relies on donations.

According to its executive director, without the funding, camps could be closed for much longer than expected.

“The longer we go without substantial financial help, the higher the probability becomes that, that could be a potential,” said Audrey Hicks, acting executive director of the camp.

The Salvation Army said Manitobans can still donate online at salvationarmy.ca and fillthekettle.com, or by telephone at 1-800-725-2769.