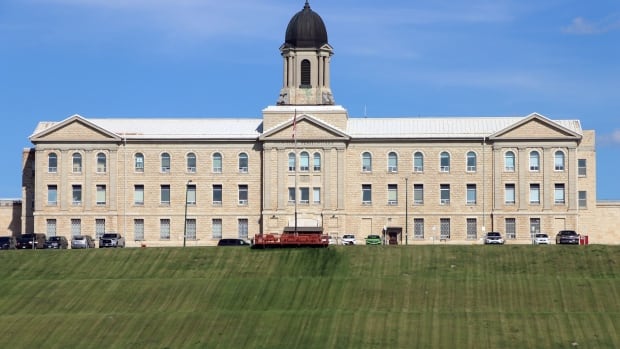 A man accused of helping plan the “cold, calculated and senseless” murder of a fellow inmate at Stony Mountain Institution last year, and later hiding the murder weapon to cover it up, has been acquitted of both charges, says the written decision from the judge.

Aaron Michael Ducharme admitted in court to taking the “shank” used to kill Adrian Fillion, 42, and hiding it in a common-area garbage can, Manitoba Court of Queen’s Bench Justice Shauna McCarthy wrote in the Dec. 16 decision.

But Ducharme testified he only did so because he was ordered to by another inmate who ran the prison range they were incarcerated in, and because he feared for his life if he didn’t do it, McCarthy’s judgment said.

Ducharme testified that order came from fellow inmate Peter Fisher — who, along with Kevin Curtis Edwards, pleaded guilty to first-degree murder in Fillion’s killing before Ducharme’s trial — the judgment said.

Fillion was stabbed 52 times in his cell and taken to hospital where he later died, the judgment said. Both Fisher and Edwards were sentenced to life in prison for the stabbing and won’t be eligible for parole for 25 years.

Ducharme said he was coming down a set of stairs near the showers that day in April 2019 when he saw Fisher look up at him and yell for him to bring a pair of sandals. When he did, Fisher threw the murder weapon out from under the door and threatened to kill him if he didn’t take it, Ducharme testified.

Ducharme started walking toward his own cell, realized he couldn’t take the murder weapon there, then turned around and hid it under some trash in a garbage can, the background information in the judgment states.

The Crown argued Ducharme was “the lynchpin in a coordinated plan,” and that without his help the murder would not have happened the way it did.

Ducharme’s lawyers relied on the common-law defence of duress to argue he shouldn’t be found guilty of being an accessory to the murder because he had no other choice but to comply with the direction he’d been given.

For that type of defence, there must be an urgent situation of clear and imminent peril and proportionality between the danger facing the accused and the harm caused by his unlawful acts, the judgment said. Compliance with the law must also be demonstrably impossible.

The Crown argued the silent surveillance footage from inside the prison presented as evidence showed Ducharme walking with Edwards and Fisher, appearing “friendly” before the stabbing, and that it suggests Ducharme lured Fillion into his cell right before he was killed there.

Ducharme testified one of his roles in prison was dealing drugs, and that he met Fillion in his cell that day to complete a hand off they’d arranged earlier. McCarthy said she accepted that explanation.

McCarthy said she accepted Ducharme’s argument that he was afraid of Fisher and Edwards, who were known gang members, while Ducharme was not. She also accepted that Ducharme had been bullied by them in prison and that he had previously seen Edwards stab three people and knew Fisher was already serving a life sentence for manslaughter.

Those circumstances “rendered his choice to pick up the shank when ordered to do so effectively involuntary,” McCarthy wrote in her decision.

“While I am not certain whether he was verbally threatened with a stabbing or simply ordered to take the weapon, I find that a reasonable person in those circumstances would have felt that they had no true choice,” she said.

McCarthy wrote it was the responsibility of the Crown attorneys, who presented “purely circumstantial” evidence, to prove beyond a reasonable doubt that Ducharme had other options — a bar she said they did not clear to prove him guilty of first- or second-degree murder, or of accessory after the fact to murder.

“Suspicion is not sufficient to prove guilt in a criminal case and particularly, in a murder case,” she wrote.