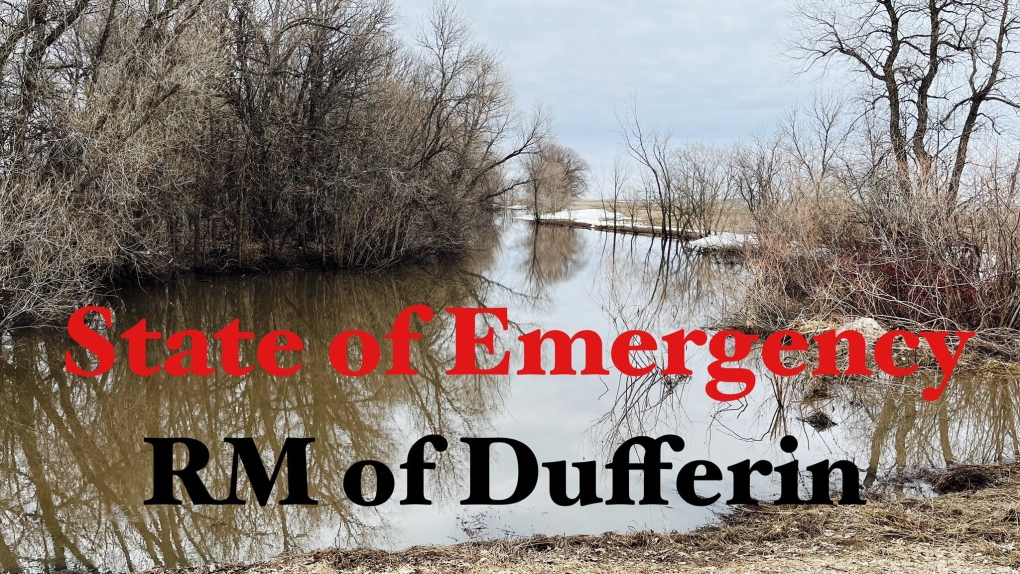 Several Manitoba municipalities have declared a local State of Emergency due to ongoing flooding.

The R.M. of Dufferin announced on Sunday the State of Emergency was put into effect because water from the Boyne River is spilling over its banks.

“It’s very rampant at the moment. I’ve lived in this area for a long time and been along the river and never seen it this high,” George Gray, the Reeve of the R.M. of Dufferin, told CTV News. “It’s like a wild horse coming down the river.”

Gray said at least half a dozen homes have been given evacuation orders just west of the Town of Carman, and more evacuations are possible.

He said the western part of the municipality is the hardest hit right now, as roads have been washed out and there is a lot of overland flooding.

Gray isn’t expecting any more rain to hit the area but he knows that they aren’t out of the woods yet.

“There is just so much water coming from the west…and it is just coming so fast, we just can’t keep ahead of it.”

He added that the river hasn’t crested yet either, noting the situation will probably get worse before it gets better.

The community hall has been opened for people who have been evacuated and Gray said for those who use the hall, they must register first so the R.M. knows how many people it has.

The Town of Winnipeg Beach also announced a local State of Emergency to deal with the flooding situation in the area.

A statement from the town’s mayor said the decision was made so council can bring in the equipment and contractors needed to assist with infrastructure that may be in jeopardy.

“At this time our public works and utility staff are working closely with our emergency measures officer in order to ensure we are protected,” Pimentel said in a statement.

Pimentel is reminding residents to stay away from areas where water is flowing.

He said there are no concerns for evacuations and if things change, an update will be provided.

Joining the R.M. of Dufferin and Winnipeg Beach is the Town of Arborg, the R.M. of Gimli and the Long Plain First Nation.

All places announced local States of Emergency Sunday due to ongoing flooding issues.

Arborg said in a Facebook post that the emergency would be in effect until May 21, noting the town is dealing with flooding that needs “prompt action.”

“Potential evacuees are in the process of being notified and arrangements are being made for accommodations,” the post said.

Residents are being reminded to not travel through water that is over roads.

Long Plain First Nation said Elders, people with medical needs and those who have impassible lanes are being evacuated and this will continue to happen until the emergency is over.

The R.M. of Gimli said in a Facebook post the measures being taken are proactive to protect infrastructure and properties. No evacuations have been required at this time.

On Saturday, the City of Morden also delcared a local State of Emergency as it was battered by rain and excessive flooding.