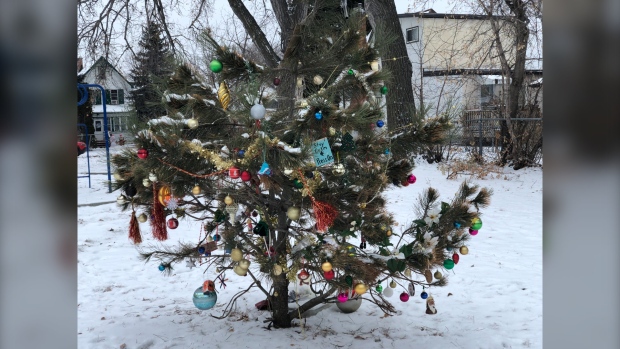 WINNIPEG — It started with just a few ornaments by an unknown Christmas tree decorator in St. James in late November.

“It’s a little ugly, but I thought it was cute when I saw a couple of Christmas balls on the tree,” said St. James resident, Marie Friesen, who’s been documenting the ever-growing number of decorations on her way to the grocery store since November.

Friesen posted a photo of the Charlie Brown neighbourhood Christmas tree with its few ornaments last month. Since then, the St. James community has taken to adding more and more decorations.

“All of a sudden, it just exploded, and people started putting decorations on (it). And now it’s so decorated, you can’t even see that the tree’s ugly,” said Friesen in a phone interview Thursday.

“Anytime I post an update on the ornament, I only hear positive comments about how wonderful it is, how they really enjoy it,” she said.

Friesen said she thinks the tree will stay covered in cards, garland, plaques and ornaments until the spring.