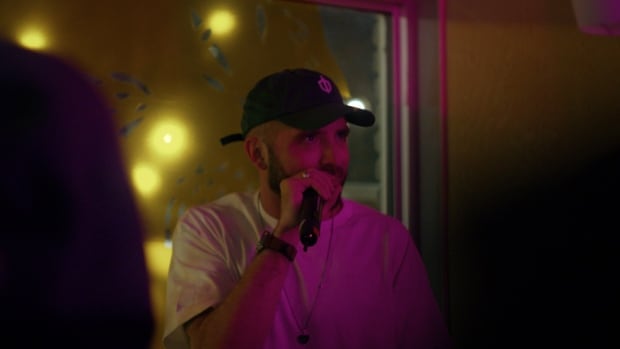 If Canada’s modern gig economy had a poster boy, Eric Olek could be it.

“I have the hardest time telling people what I do for a living,” said Olek.

Through his Winnipeg company, Friday Knights, Olek designs and makes clothing, and he produces events (hip-hop karaoke, for one).

The 30-year-old is also on a mission to bring people — particularly Winnipeg’s dynamic, young community of urban artists, thinkers, influencers and entrepreneurs — together in a new underground movement where art, music, clothing and events intersect.

It all happens inside 374 Donald St. — a building just south of the intersection of Donald and Notre Dame Avenue in downtown Winnipeg.

“I definitely see this space as a creative incubator,” said Olek, who is now the subject of a short video by Winnipeg filmmakers Quan Luong, Ian Bawa and Ryan Offenloch for CBC Manitoba’s Creator Network.

The CBC Creator Network engages storytellers, filmmakers, artists, writers, photographers, illustrators and other creatives to create content through their own lens and about their own communities.

The downtown space doesn’t have a name yet but that’s where Olek, alongside artist Peatr Thomas and hip-hop label Fourth Quarter Records, work independently and collaboratively on projects.

While the COVID-19 pandemic has put a pin in large gatherings, Olek hopes to soon host more hip-hop karaoke nights, open studio time for artists, and other events.