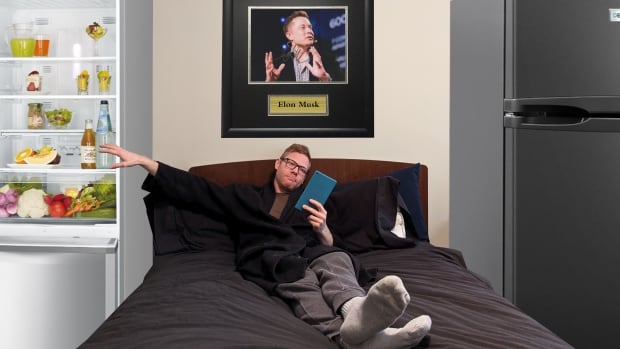 This column is a (comedic) opinion by HUNKS sketch comedy group in Winnipeg. For more information about CBC’s Opinion section, please see the FAQ.

For those of you who don’t know, Earth is a heinous mess, and Earth Day is the one day a year we do something about it.

Every year, people observe Earth Day by turning off the lights for an hour, practising yoga outdoors or setting their dog free.

But it’s not nearly enough!

One recent study suggests that doing yoga outdoors — even 365 days per year — will only slightly decrease the amount of dangerous chemicals seeping into our water supply.

It’s a start, but we have to do more! Much more. So here’s a list of things we (you) can do to really show Earth who’s boss.

1. Reduce the use of refrigerators:

Sure, it’s nice to have a fridge in the bathroom, but all those CFCs (aka chlorofluorocarbons) are a major contributor to the depletion of the ozone layer. If humanity is going to survive until our stated end goal of 2028, we need to reduce the number of fridges in our homes to a sensible single-digit number.

After that, whatever! Get all the fridges you want. We just have to get to 2028.

Reducing the amount of paper we use has never been easier! Post a “No Flyers” sign on your mailbox, switch to e-bills, and start reading e-books. I’ve replaced each of the 652 books in my personal library with 652 Kindles. If I can do it, so can you!

3. Invest in a reusable cup:

My Uber driver was telling me that reusable cups are going to triple in value by July, so get all your money into reusable cups! (This content is intended for informational purposes only and should not be used in place of professional financial advice.)

Plastic six-pack rings wreak havoc on wildlife, tangling their legs, wings, and mouths, leaving them unable to fend for themselves in the wild.

So instead of buying a six pack of beer, get a two-six of whiskey and some mix, a bottle of wine, and maybe some of those premixed shooters that they keep by the cash register.

5. Turn off your blender for an hour:

It doesn’t seem like much, but if everybody stopped using their blender for just one hour, I mean, SOMETHING would probably happen.

Let’s not be the ones standing at the star gate on Sept. 21, 2028, waiting for the mother ship, wondering what would be different if we just stopped blending everything all the time.

Remember, Earth Day is not about you or me.

It’s about ensuring the health and well-being of the only planet we have for the next 89 months. If we can do our part, Elon Musk will do his, and then we’ll be outta here.

But for our exit strategy to work, there still needs to be a planet left for us to evacuate.