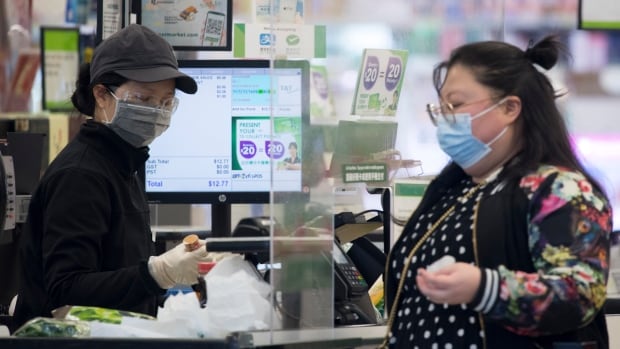 People working in front-line jobs — including at restaurants, grocery stores and schools — in communities with higher risk of COVID-19 will be eligible for a vaccine starting Friday, Manitoba health officials say.

New details about the plan to extend eligibility to anyone over 18 living in certain geographic areas with high rates of transmission or serious illness, as well as people working in certain front-line jobs in those areas, were released during a media briefing on Wednesday morning.

The province is still in the process of deciding which areas will get priority access, and expects to release that list on Friday, when people in those areas will be able to start booking appointments.

Decisions about which areas will be given priority access will be based primarily on previous rates of COVID-19 transmission, as well as population density, the proportion of racialized populations, average income, and an assessment of housing, said Dr. Joss Reimer, medical lead on the province’s vaccine implementation task force.

The province also announced last week that all front-line police officers and firefighters would become eligible for a vaccine. Those first responders can start booking appointments at 11:45 a.m. Wednesday.

That includes an estimated 2,400 front-line police officers and 4,700 firefighters, including volunteer firefighters.

Due to the volatility of the supply of Moderna vaccines, as well as updated delivery estimates from the federal government, Manitoba has adjusted its timelines for when all Manitobans should be able to get a first dose.

Both the high- and low-supply projections now estimate the youngest cohorts should become eligible by early June, with the high-supply scenario complete by June 5, and the low-supply by June 9.

The province announced Tuesday that it will open five more clinics in four cities that will serve First Nations people living in urban centres and people experiencing homelessness or living in precarious housing.

One of the Winnipeg locations — at the Aboriginal Health and Wellness Centre on Higgins Avenue — is set to open on April 29.

As of Tuesday, all First Nations people 32 and older in Manitoba are eligible for any of the currently approved vaccines. All other people in Manitoba, including those who are Métis or Inuit, who are 52 and older are eligible.

However, anyone age 40 and older can receive the AstraZeneca-Oxford vaccine through appointments at medical clinics and pharmacies, the province announced on Monday. A map on the government website shows where the vaccine is available.