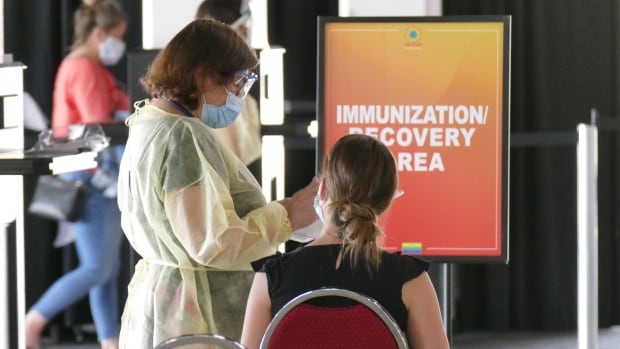 Manitobans will now be able to travel without having to self-isolate for two weeks if they’ve been fully vaccinated.

An immunization card will be provided to them two weeks after a person has received both doses of a COVID-19 vaccine, Premier Brian Pallister announced Tuesday.

People are only considered fully vaccinated once they have waited two weeks after their second shot because that’s how long it takes for the vaccine’s antibodies to build up.

“We hope this is a temporary measure, of course, as we get to the point where everybody is vaccinated. But in the interim period, this is an important additional thing that’ll benefit you,” he said.

Being able to travel within Canada without the requirement to self-isolate on the return to Manitoba is one of the first benefits from being fully immunized, Pallister said.

In addition, Manitoba health-care facilities, including hospitals and personal care homes, will permit expanded visitation if both the patient or resident and visitor are fully vaccinated. That is expected to be offered up in the coming week.

Another bonus already in place is that anyone identified as a close contact of a COVID-19 case is exempt from self-isolation if they are fully vaccinated.

Additional benefits will be announced in the coming weeks, Pallister said.

The digital and physical vaccination cards contain no personal health information or data. They only show the person’s first and last names and a QR code that, when scanned, will show the person is fully vaccinated.

The challenge now is reaching those who are vaccine hesitant and last week, Pallister unveiled a grant program designed to help groups increase the uptake in areas where COVID-19 vaccinations are low.

The province set aside $1 million for grants of up to $20,000 each available to cultural, arts, education, sports, religious, community and business organizations that can prove they have the ability to reach vaccine-hesitant people.

That was announced one day after health officials unveiled other strategies to reach people who haven’t received their first dose because of difficulties getting to the provincial vaccination supersites.

Mobile outreach vans, house calls and community-hosted clinics are being launched to bring the vaccines closer to those people.

Pallister believes the immunization card and the limited freedoms it brings will be an effective way to encourage people to get the shot.

“Manitobans have also told us that getting back to the things they love is one of the biggest incentives to getting vaccinated,” he said.

Just over 946,000 vaccinations have been administered in the province so far, which equates to a little over two-thirds of eligible Manitobans who have received at least one dose.

“As we move forward with our reopening plans and as more Manitobans get fully vaccinated, there may be more items or privileges available to those who have an immunization card,” Pallister said.

Asked specifically if the cards might be used to get access to provincially-run attractions such as museums or casinos, Pallister said “there’s a lot of possibilities here” and noted he would have more to say on that topic when he speaks to the government’s reopening strategy later this week.

Applying for the card

People can apply for the card using a new online portal through the government website.

Once someone has successfully completed the online request, they will automatically receive access to a digital card, according to a government news release.

There is also an option to request a physical card that will be mailed to the address on the applicant’s Manitoba health card. If a physical card is requested, it can be expected in the mail within 14 days.

The province has studied the idea of offering cash incentives to individuals who get a shot, but the province’s research suggested Manitobans don’t like the idea of some people getting something that others can’t get.

However, he has said he isn’t ruling those out in the future.