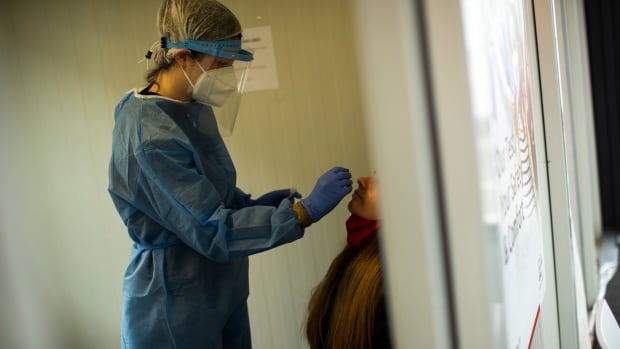 Manitoba is reporting 259 new cases of COVID-19, as well as a possible exposure to a more contagious coronavirus variant on a flight that landed in Winnipeg earlier this month.

The possible exposure took place on WestJet Flight WS526, which departed Calgary at 9:50 p.m. on April 16, and arrived in Winnipeg at 1 a.m. The exposure affects rows one to six, a provincial release says.

Most of the new COVID-19 cases announced Sunday were in the Winnipeg health region, which posted 188 new infections.

There are also 25 cases in both the Northern and Prairie Mountain health regions, 15 in the Southern Health region and six in the Interlake-Eastern health region.

No new deaths were reported on Sunday.

Manitoba’s five-day test positivity rate rose to 7.1 per cent from 6.8 per cent on Saturday. In Winnipeg, that rate jumped to 7.6 per cent from 7.2.

There are now 139 COVID-19 patients hospitalized, the province said, down from 140 on Saturday. Of those, 37 are in intensive care, up by three.

Meanwhile, the province says there’s a trend of concerning case numbers in a northern First Nation and public health officials are working with the community to address it.

The chief and council of Chemawawin Cree Nation, which is about 400 kilometres northwest of Winnipeg, have ordered community members to stay at home, and public gatherings aren’t allowed.

People should only leave their residence to seek testing or medical care, or to send one person from a household for essential supplies. Those who work in essential services are able to leave their home for work. Non-medical masks must also be worn outside the home.

The latest update comes after Manitoba reported 276 new cases of COVID-19 and three deaths on Saturday, marking the third time in a week the daily case total passed the 200 mark.

Saturday’s update marks the highest jump in COVID-19 cases in a single day since 350 cases were announced on Dec. 18.

Provincial data on variants of concern is updated from Tuesday to Saturday.