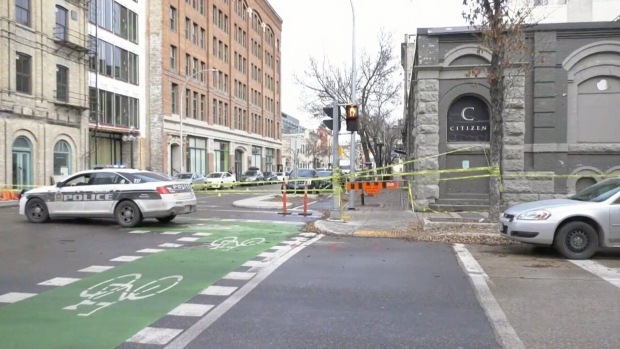 WINNIPEG — The Crown is seeking a 13-year sentence for a man who pleaded guilty to two charges following a fatal shooting involving members of a criminal organization and their enemies.

Rami Hagos, 26, pleaded guilty in February to discharging a firearm with intent and possessing a loaded restricted firearm.

Court heard Hagos went to a Halloween Party at Citizen Nightclub after midnight with his girlfriend and a friend.

Crown attorney Libby Standil told Court of Queen’s Bench Justice Sadie Bond, Hagos fired seven bullets from the doorway of the nightclub at a group of men after his friend Jamshaid Wahabi, a gang member, was shot in the head and killed on the dance floor of the club.

“What this admission means and what he has taken responsibility for, was that Rami Hagos carried a loaded 9 mm handgun into Citizen Nightclub on Nov. 2, 2019,” Standil told the court. “While his act to pursue and shoot the males who came after his friend may have been reflexive, that was only possible because he was armed in a public place with a loaded handgun tucked into his waistband.”

Court heard Wahabi was shot by Rig Moulebou following an altercation in the club between Wahabi and Hagos and another group of men. Standil told the court that altercation prompted Moulebou and two other men to attend the club.

Court heard Moulebou was struck by a shot fired by Hagos as he fled the club after Moulebou shot and killed Wahabi. Moulebou survived but was shot and killed two days later in retaliation for Wahabi’s death, Standil told the court.

Standil told court one of Moulebou’s associates was also struck, fell to the ground and was treated in hospital after suffering a shattered femur.

“This all took place in a club populated by innocent parties, and this bled out onto city streets,” Standil told Bond. “The danger to the general public was immense.”

Court heard Wahabi and Hagos did not pass through security at the nightclub.

Police initially thought the gun was Wahabi’s but Standil told the court investigators got wiretap authorization and production orders for calls made by two individuals from jail.

In one of those calls court heard Hagos admitted to his girlfriend he brought in the gun.

On Nov. 7, 2019, Hagos was stopped by police in a vehicle at Wahabi’s funeral and officers seized a .50 calibre Desert Eagle handgun.

Standil argued the gun, which the court heard Hagos admitted in the calls he brought into the vehicle, was for protection or worse.

She argued his guilty pleas, display of remorse and traumatic background should be considered.

Antila told the court Hagos, who identifies as Eritrean, is a Canadian citizen who previously lived in Sudan where he witnessed violence including torture, stabbings and where his uncle was murdered.

She told Bond Hagos suffered a soccer injury and started associating with people who were not his normal friends and making poor decisions, including trafficking cocaine as a way to make money.

“He was doing this for himself,” Antila told the court. “He wasn’t working for a criminal enterprise.”

“He was not and is not a gang member.”

Hagos told Bond: “I made some mistakes in my life. I hope you give me a chance to make myself a better man that I want to be.”

She was helped out of the courtroom by family.

Bond has reserved her decision. A sentence is expected Sept. 10.