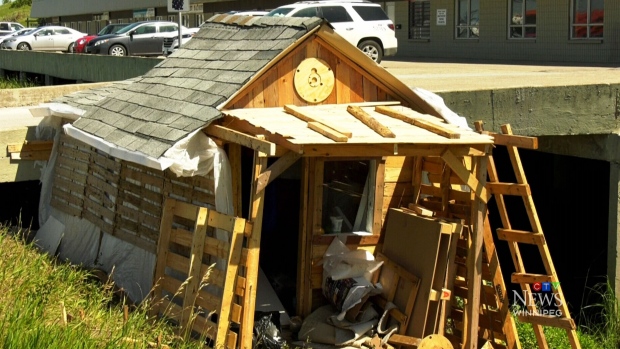 The man behind a homemade structure Winnipeg drivers may have noticed spring up under a bridge over Omand’s Creek said he knows he could be asked to leave at any time, but doesn’t want to return to sleeping in the streets.

Allen Par, a carpenter by trade, said he lost his job in 2014, four years after coming to Canada from the Philippines, to find work and to “find a better future.”

He told CTV News after spending last winter under a bridge, he decided to build the house.

“Because I want a better sleep at night,” he said. “Because before, I don’t know where I’m sleeping.”

Par has been working on the build every day for the last two months. He said he’s used wood from pallets given to him from stores for free, and purchased other materials — like shingles, nails and cement — with money he earned returning shopping carts to a store.

“The people there, they give me food, sometimes they give me money, and I accept that because that is the grace, right?” he said.

An employee of a nearby business said the structure hasn’t gone unnoticed, but Par has been nothing but respectful.

“I’m just really impressed with it,” said Jasmine Illsley, who works at the Vapour Mill. “He’s definitely a handy man. He builds it very quickly and it looks great, surprisingly.”

Par’s home is built on city property and he said he’s aware he could be given marching orders.

In a statement to CTV News, the City of Winnipeg said it is working with community groups to: “develop an inclusive plan for temporary encampments going forward to ensure greater consultation takes place before the city takes actions that impact those experiencing homelessness.”

Par said he has just one hope: to not end up “sleeping in the street again.”

-With files from CTV’s Jeremie Charron