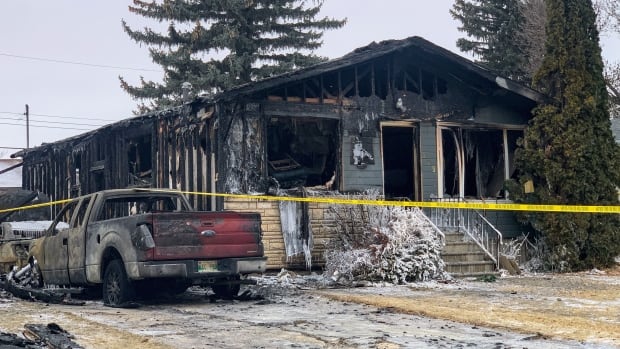 The son of an elderly couple who were killed in a house fire in the early morning of Christmas Eve in Morden, Man. says his family — and community — are devastated by the loss.

Lorne and Rose Marie “Midge” Kyle were fixtures in the community, but above all, they were beloved parents and grandparents, Angus Kyle says.

“When we found out we just all laid in one bed and started crying,” he said of himself and his two daughters.

“It’s devastating. You can’t wrap your head around it.”

Crews responded to a report of a fire at the couple’s Birchwood Drive house at about 4:15 a.m., Morden Police Service Sgt. Chris Flook said. Once they put out the blaze, crews found the bodies of a man and a woman, both in their 80s.

Angus thinks the fire started in the garage and spread to the house, but that hasn’t been proven.

The house is in ruins, and with it so many memories of his parents, Angus says.

“Because of the fire, there’s nothing left,” he said. “I’ve got no photo albums, no jackets or anything to remember them by. That’s one of the toughest parts.”

Angus says he’s trying to keep some semblance of the holidays for his daughters, but it’s very difficult because his parents were so involved in many of the traditions.

“We still gotta have Christmas for them … trying to keep it normal somehow,” he said.

A legacy of family and community-mindedness

Angus and Lorne worked side-by-side at Springfield Mills, a buckwheat supplier for many years. Lorne helped form the Buckwheat Growers Association of Manitoba and served on a number of other grain boards.

On top of that, Angus says, his father was a generous man.

Because of the fire, there’s nothing left. I’ve got no photo albums, no jackets or anything to remember them by. That’s one of the toughest parts.– Angus Kyle

“He’s going to be a hard guy for me to live up to. He had a lot of humanity in him. He cared for a lot of people and a lot of things and wanted to help them,” he said.

A friend for about 50 years, Harry Siemens says he got to know Lorne playing fastball and working in farming.

“He had a gruff demeanour sometimes, but his heart was bigger than most people’s combined,” Siemens said.

Midge “was the glue that kept the family together,” Angus said, adding his mother loved to go to church, sing in choir and play golf. “She was a woman behind the scenes who kept us all on the straight and narrow.”

“Every community has 20 or 30 people like that. And this couple was one of them,” Brandon Burley said in an interview the day of the fire.

“There was nobody, I think, who didn’t know them and who weren’t influenced in some way by their community service …They’ll be hard to replace in the community. People like that aren’t made every day.