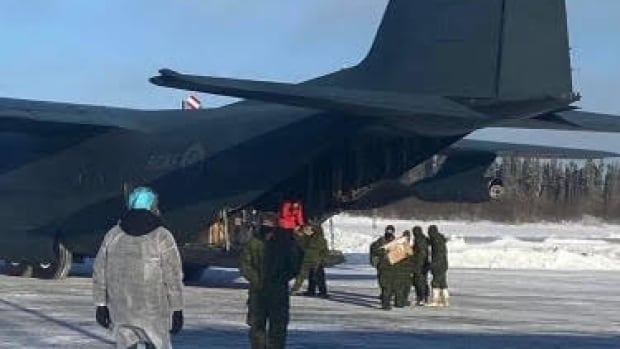 The federal government has beefed up its military response in northern Manitoba’s Red Sucker Lake First Nation, where more than two dozen people have fallen ill from COVID-19.

Some 35 Canadian Armed Forces members arrived in the community, about 535 kilometres northeast of Winnipeg, on Thursday after receiving a request for help from the First Nation, Defence Minister Harjit Sajjan and Public Safety Minister Bill Blair both tweeted.

The group consists of a medical team, support and general duty personnel and leadership from CFB Shilo and CFB Edmonton, a National Defence spokesperson said in an email.

They will work alongside members of Red Sucker Lake and other government departments and agencies in providing “humanitarian assistance and addressing the emergent needs of this remote community,” the spokesperson said.

The deployment follows a visit by a smaller contingent that arrived Monday and included armed forces members from CFB Shilo as well as other federal, provincial and community partners.

The purpose of that visit was to rapidly assess the COVID-19 situation and determine the next steps.

Whoever is symptomatic will be tested and those who test negative will be retested every five to seven days afterward, Knott said. So far, 28 people have tested positive for COVID-19 in the community of about 1,000, he said.

The military members who landed Thursday will:

“The CAF will remain until the need for military assistance is satisfied. We work closely with provincial and federal authorities to monitor the situation and determine criteria that would indicate when our support is no longer required,” the National Defence spokesperson said.

“Once our forces are no longer required to support response to COVID-19, they will return to bases and units, where they will regenerate so they are ready for future tasks.”