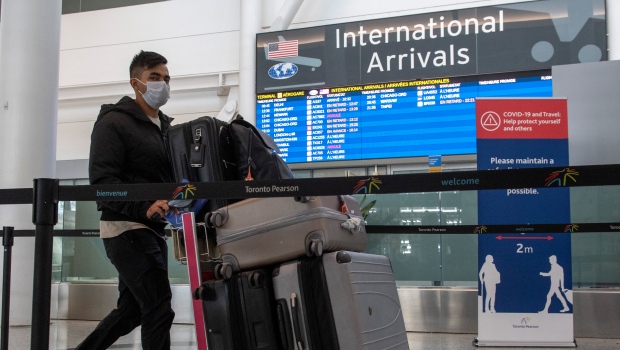 TORONTO — As India grapples with soaring COVID-19 infection rates, the Canadian government is considering additional measures to prevent further spread of the virus from international travel.

In an interview with CTV News Channel’s Power Play on Wednesday, Public Safety Minister Bill Blair said the federal government is looking at what tools they can have at their disposal.

“We are very actively considering all and any additional measures that… will be necessary to protect Canadians,” he said.

Blair said they could ground certain flights coming into Canada and they could “deal more effectively” when travellers present falsified test results.

Under the current rules, travellers flying into Canada are required to present a negative PCR test within 72 hours of their departure flight. Upon landing in Canada, they must take another test and quarantine in a designated government hotel until they receive the results of their second test.

However, the minister stopped short of saying the federal government is actively considering banning certain flights from India.

“What I can tell you is we have previously banned flights from areas where there was a high incidence of infection, particularly with the new variants, and we are actively considering the use of very similar tools, those tools, again, which we’ve demonstrated our willingness and ability to use those tools to protect Canadians and we’re still quite prepared to do that,” he said.

Blair said he hoped to share more information on the specifics of these additional measures on Thursday.

“Throughout April, dozens of COVID-positive flights have been landing in Canada. With them, they brought the risk of new variants, including the double mutated variant that is currently overwhelming India’s health-care system,” O’Toole said. “We have a small window of opportunity to act, and we must move now.”

There were 35 flights from India with at least one COVID-19 case on board that arrived in Canada in the last two weeks, according to the government.

On Wednesday, the first case of the B.1.617 variant, which was first identified in India, was reported in Quebec.

Canada’s chief public health officer Dr. Theresa Tam said that country-specific travel restrictions “can only go so far” when it comes to preventing the spread of highly contagious variants, such as those that originated in India and Brazil.

“The virus globally is undergoing evolution and there are many different mutations and changes in the virus, particularly in countries that have a lot of cases,” she said during a press conference Wednesday. “Given that situation, a strategy for Canada was to add more layers of protections for every country.”

Last week, the Public Health Agency of Canada dropped their recommendation for additional screening measures for travellers arriving in Canada from Brazil because there wasn’t clear evidence that additional questioning protocols were adding “operational value” and the P.1 variant associated with Brazil was already on the rise in Western Canada.

As for India, Tam said her team is conducting a risk analysis of the situation there and collecting data on how many people were arriving in Canada with positive COVID-19 test results.

Earlier in the week, Prime Minister Justin Trudeau defended his government’s enhanced screening measures for international travellers in response to the emergence of variants of concern around the world.

“We are continuing to look at more [measures] and I have asked our officials to look carefully at, for example, what the U.K. has done very recently on suspending flights from India,” he told reporters in Ottawa. “What more can and should be done to ensure that we are not getting cases in from overseas.”

On Monday, the U.K. imposed a travel ban on most visitors from India in light of the current coronavirus situation in that country.

India recorded the highest one-day tally of new COVID-19 cases in the world with more than 314,000 new infections reported on Thursday. The country, which is the second-most populous in the world, also reported 2,104 new deaths related to the virus, which is their highest in a 24-hour period.

In total, India has had more than 15.9 million COVID-19 cases since the pandemic began – the second-highest amount after the United States.

The mounting cases have resulted in acute shortages of beds and medicine and low oxygen supply in a large number of hospitals, India’s health ministry said. In response, the government has been rushing oxygen tankers to replenish hospital supplies.

There are also reports of overwhelmed crematoriums and morgues with bodies piling up outside on sidewalks.

With files from CTV News’ Sarah Turnbull, The Canadian Press and The Associated Press