Armed with a pile of blankets and a backpack on her lap — everything she owns — Kathleen Napokesik is taking shelter inside a freezing, unheated Winnipeg bus shack, even though she knows she might die there.

“No income, no place to live, just homeless … and it hurts. Especially being in a wheelchair,” she said.

The 47-year old has a spinal cord injury and trouble moving her legs. It’s –30 C, but she and her nephew have already spent several hours huddled together inside the bus shelter on Portage Avenue in front of the Mountain Equipment Co-Op.

It’s where the pair, both originally from Shamattawa First Nation, have also slept overnight, taking turns staying awake to make sure the other stays alive. During their waking hours, they drink, something she says keeps her warm and able to face the day.

“Look at this, frigid, brutal, temperatures. I’m going to freeze someday, you know that? Maybe you guys won’t see me next time,” she said.

“It’s sad. Sad being homeless, no income. We’re way down there. Rock bottom. Nothing.”

Prompted by the people taking refuge in bus shelters, Mayor Brian Bowman announced the opening of the Millennium and St. Boniface libraries to provide warmth to the unsheltered population in Winnipeg during the coldest months. 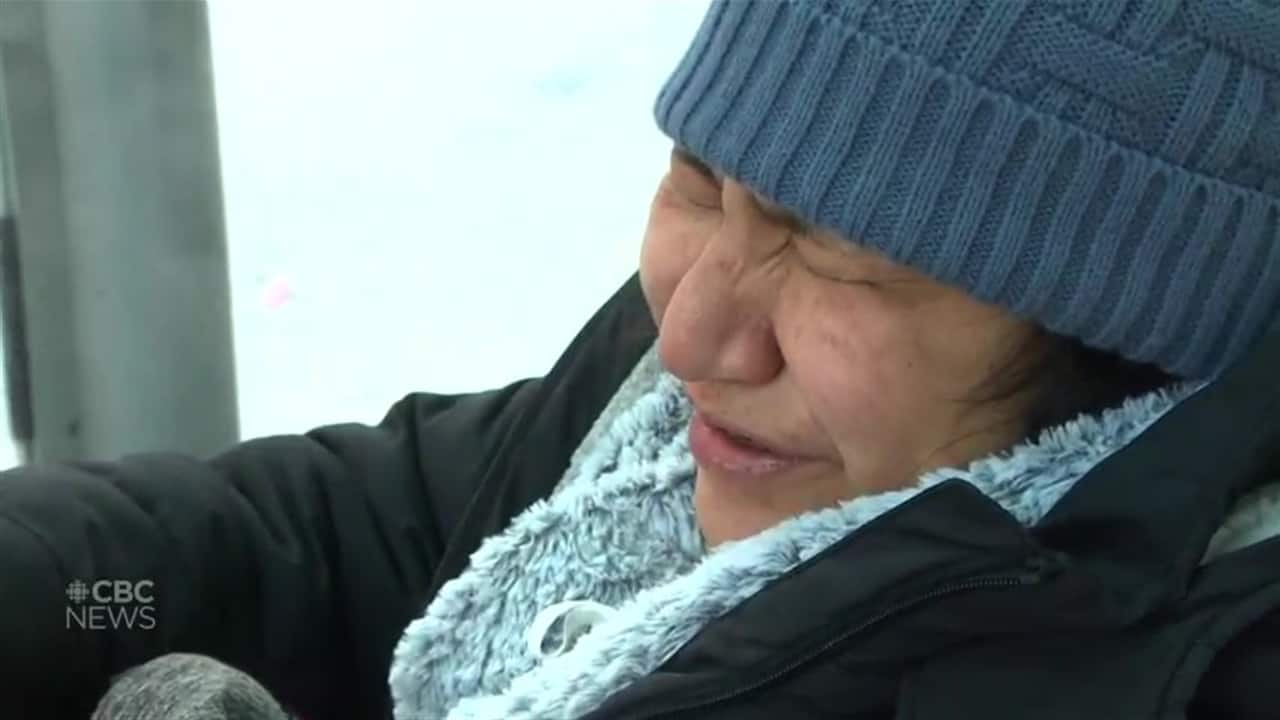 As libraries open up daytime warming space for the homeless, the reasons why some won’t use them are complicated. 3:07

The Millennium Library is only a few blocks away from her, but Napokesik doesn’t want to warm up there.

“But there’s friends there,” she said, gesturing to her nephew and another friend from Bunibonibee Cree Nation, who said he can’t return home because of his community’s lockdown. “Other homeless people. They’re so friendly. They give, give.”

Napokesik said she claimed CERB and had her EIA funding cut off on Dec. 1, so she no longer qualifies for public housing.

“That’s why we’re homeless. They don’t want to pay our rent. There’s lots of us in Winnipeg. That’s true, and it hurts, especially when you’re disabled.”

Her plan with her street family on Friday was to ride the bus to stay warm.

“To and fro. We go to a lot of places. Sometimes bus drivers, they’re helpful. They’ll call Main Street Project.”

But despite having that option, she said she often chooses the bus shack over shelters, because she can stay with her friends, free from rules. She added it’s hard to sleep on the mats at Main Street Project, given her disability.

“There’s limited space, there’s a lot of homeless people in the city. Sometimes you don’t get the space or bed. Every homeless in those places you just mentioned? We have to be out, like, 7 a.m. Where do we go?”

Warming spaces are available at the Millennium and St. Boniface libraries, beginning Friday, from 10 a.m. to 5 p.m. on most days. St. Boniface won’t be open Feb. 14-15, and will offer shorter regular Sunday hours of 1-5 p.m.

“It’s another Band-Aid solution to a complex and important problem in our community,” said Lara Rae, floor manager at the West Broadway chapter of 1JustCity, which provides shelter, food and help to people in need.

Rae says a better solution would be to offer harm-reduction sites, where people who use substances can take refuge without shame.

“Obviously when people are highly intoxicated there are conflicts that happen. But if people are addicted to substances, then the idea of being able to parcel out small amounts just to keep them from going through withdrawal symptoms within a safe community space is what we have to do.”

Rae’s organization is among many grassroots groups taking on a large burden of the work with this population — amidst the pandemic and extreme cold — without the needed funds or staffing levels.

She said people choose not to go to a shelter for many “good reasons” including their addiction, feeling safer with their street families, or for simply being able to choose.

“If we’re going to continue to police people’s drug and alcohol intake, which we don’t do in any other community, then we’re not going to be able to serve people properly. We need to meet people where they are.”

Rae said the daytime hours of availability of the libraries and other services in the city aren’t enough. People need housing, or at least to be in an indoor space where their basic needs are met, without facing a daily early morning eviction — along with everything they own.

“We need to be operating 24/7 to meet the needs of our people. It’s the only way towards reconciliation.”

Bowman called the city’s move to open library spaces a “last line of defence” to meet housing needs, which are actually under provincial jurisdiction. In a statement, Families Minister Rochelle Squires said she welcomes the opportunity to collaborate with the city on helping Winnipeg’s homeless population.

Napokesik wants the government to collaborate with her.

“I thank God for donations,” she said, staring at the camouflage mitts she got from the United Gospel Mission.

“We’re trying to survive. It’s hard, a hard life. I wish I could move to Africa, somewhere I can stay warm. Instead I’m in the brutal cold,” she said, putting her head down, blinking hard to stop the tears.