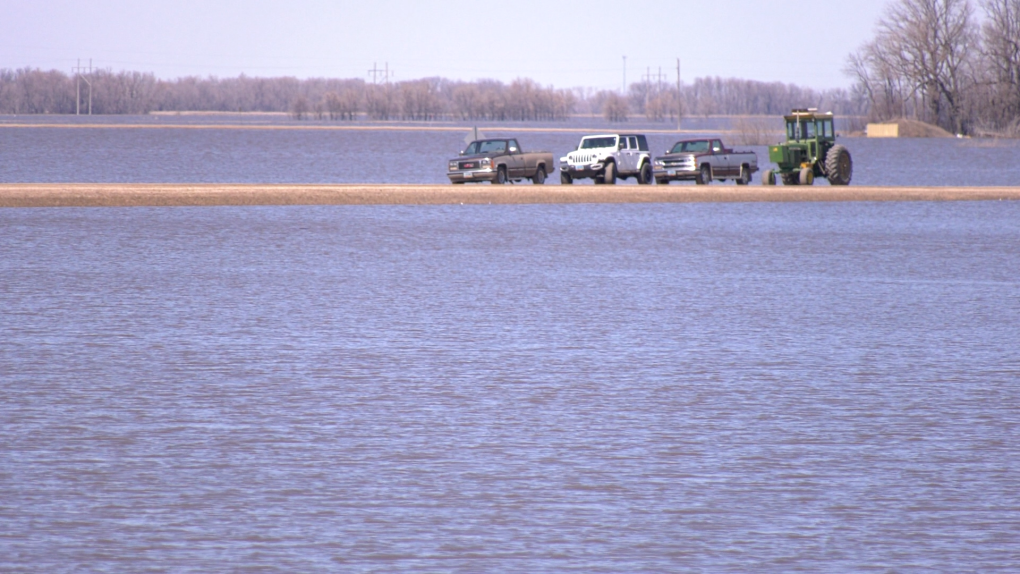 A special weather statement from Environment and Climate Change Canada says another Colorado Low may be on the way.

The statement, which was issued Wednesday afternoon, said a third major low-pressure system will impact parts of southeastern Saskatchewan and southern Manitoba. It is expected to bring more precipitation to areas that have already been saturated and are dealing with overland flooding.

The statement says 20 to 50 mm of precipitation can be expected, most likely as rain but there is a possibility it may come as snow over the higher terrain of southwestern Manitoba.

“Uncertainties with this system remain higher than the previous two; there is a chance the system remains entirely in the United States. However, the largest likelihood is that areas near the international border will receive the largest amount of precipitation,” the statement reads.

Half an hour north of Grand Forks, the town of Oslo, Minnesota, is already surrounded by water, with several area roads washed out and barricaded.

Brad Johnson has been boating into town since Wednesday, so he can get to work, and get his kid to school.

“It’s not that fun when it’s windy out. You get kind of used to it,” he said.

People living here are watching the rising water after the area was hit by three days of rain and snow, just like southern Manitoba.

They are wondering if they’ll have to close the community’s ring dike, which would turn the town of 330 people into an island. It is something they’ve had to do in years past.

“The first three years I lived here, we had a flood every year and we were boating every year. Every flood is different – none of them are the same,” Johnson said.

The National Weather Service said between Grand Forks and the border, the Red River has spilled its bank, picking up water from other tributaries as it flows towards Manitoba.

“As we approach Oslo, now that river is eight plus miles wide,” said Gregory Gust with the National Weather Service in North Dakota.

“Rain, if and when it occurs, will wet the landscape back down again and in many places could cause additional runoff,” Gust said.

Officials believe the river may have peaked in Grand Forks a little lower than expected. No sandbagging or evacuations have been required, but two major bridges connecting the city to East Grand Forks are walled off.

“It’s tough on both communities, but you know what, (I’d) rather have this than having water coming down the street,” said John Bernstrom, a public information officer in Grand Forks.

Back in Oslo, Brad Johnson is keeping an eye on the water and the weather forecast and is remaining optimistic about access to his town.

“I want to see it stay open,” he said. “I’m thinking it’s going to be right to the edge and the road will stay open – (that’s) what I’m hoping for, that’s what I’m thinking now, but you never know.”

Town officials in Oslo say some people outside of town have already moved temporarily until the flood waters go down, and some are hunkering down.

The National Weather Service said the crest at the border is expected around May 4 or 5, with water levels around 50 feet. But, of course, it all depends on how much rain falls this weekend.