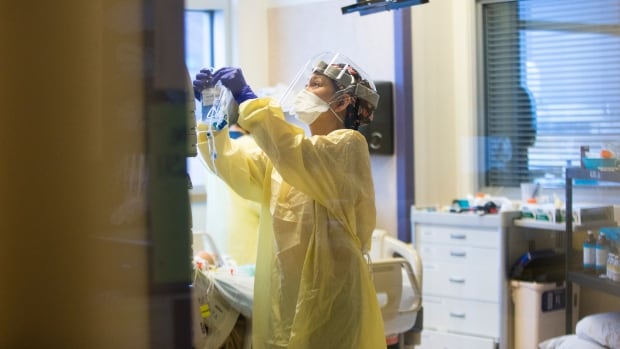 And more are likely, he said.

“We don’t know what the full impact of the holidays will be.”

As a result, it’s too early to make a call on relaxing the restrictions in public health orders set to expire on Jan. 8, Atwal said.

“We know code red has been challenging to all. We have been asking you to restrict your life for eight weeks and that’s a long time. But we’re also seeing the impact of those restrictions in our numbers and in our hospitalizations,” he said.

“Today’s numbers are a bit higher but the restrictions in place have made a difference and are continuing to make a difference.

“I’m asking you to keep going.”

The holiday season is not yet over, with Ukrainian Christmas on Thursday, he said.

“We have been worried about a spike following the holidays, and those numbers will influence the decisions about what kinds of changes can be made to the restrictions in the coming days,” Artwal said.

“We won’t be speculating today on what might happen.”

Test positivity rates are still high, with the current five-day rate is 10.4 per cent provincially and 11.5 per cent in Winnipeg, Atwal said.

The hospitalization and ICU numbers are also both high, he said.

There are 329 people in hospital because of COVID-19, with 237 having active cases and 92 who are no longer infectious but continue to require care.

There are 37 people in intensive care because of COVID-19, with 32 having active cases and five no longer infectious but continuing to require critical care.

As a result, elective surgeries are still being deferred, impacting many people, Atwal said.

“Our health-care system continues to be taxed.”

The total number of deaths due to COVID-19 in Manitoba is now 705.

The latest deaths include four people connected to health-care facilities in Winnipeg.

A woman in her 40s died in the Northern Health Region, and the remaining four people are from the Winnipeg health region — a man in his 80s, two women in their 90s and a man in his 90s.

There were 1,845 tests completed Tuesday, bringing the total number since last February to 430,597.

The province is working to ensure visitation shelters at personal care homes will open “in the days and weeks ahead,” Atwal said.

The new all-season shelters will allow some social visits between residents and family members or friends.

Through code red, only designated care providers have been allowed to visit. Once the new shelters are ready, additional visitors will be allowed.

Premier Brian Pallister also announced on Wednesday that all people living in Manitoba personal care homes will have a chance to get their first dose of the COVID-19 vaccine over the next month as part of a campaign that starts Monday.

In the meantime, Atwal announced that outbreaks have been declared over at Oakview Manor in Blumenort, River Park Gardens Personal Care Home in Winnipeg and the Thompson General Hospital MSP ward in Thompson.