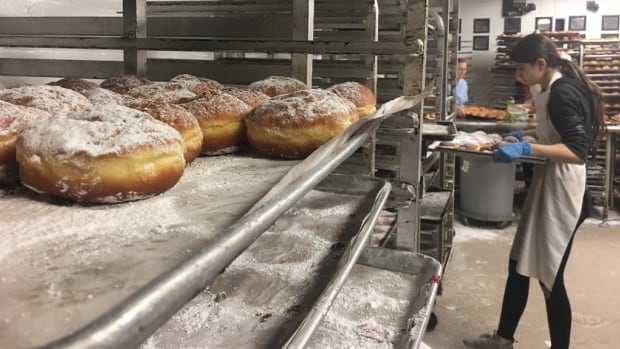 For many Christians around the world, Shrove Tuesday is often celebrated by eating rich, fatty foods in preparation for the first day of Lent.

In countries like Ireland, Shrove Tuesday is sometimes called Pancake Tuesday and is celebrated by eating — you guessed it — pancakes.

Here in Windsor-Essex, however, Shrove Tuesday is more often thought of as Paczki Day, and residents celebrate by stuffing themselves with the Polish doughnut treat.

Ron Szpak, for example, said Paczki Day has been a tradition since his youth.

Bakeries across the region prepare for Paczki Day well in advance, with places like Lakeside Bakery in Leamington working round the clock for almost a week in anticipation of lines of hungry residents.

“Believe it or not, we will sell up to 75,000 paczki,” said bakery owner Danielle Tartaro, adding that staff began selling paczki last Wednesday.

In Sarnia, Global Donut and Deli owner Gus Pantazis said selling packzi has allowed the store to transform February from what’s normally the “slowest retail month” into its “busiest month of the year.”

I’ve been given a very special behind the scenes look, where folks are working hard to keep up with demand… expecting to make more than 36,000 Paczki today! <a href=”https://t.co/2nPd3ZISMB”>pic.twitter.com/2nPd3ZISMB</a>

And for bakeries like Blak’s Bakery in Windsor, Paczki Day is often the busiest day of the year. In fact, staff at Blak’s Bakery expect to make more than 36,000 on Tuesday alone.

Check out this CBC Windsor video from 2018 about the exercise equivalent of a paczek:

Check out this video from 2018, where a personal trainer takes us through what it takes to work off the calories from a paczki. 1:16