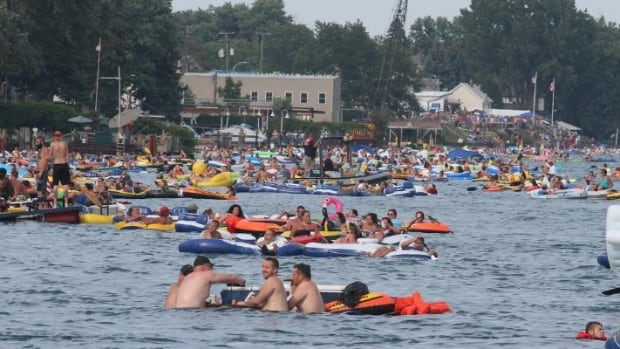 The Canadian Coast Guard has a message for anyone interested in taking part in Sunday’s annual Port Huron Float Down: Don’t do it.

The annual event sees thousands of people in all manner of vessels — including inflatable inner tubes and even air mattresses — float down the St. Clair River from Port Huron, Mich. to Marysville, Mich.

Despite the event’s annual popularity, past float downs have caused trouble — In 2016, approximately 1,500 Americans floated to Ferry Dock Hill in Sarnia, Ont.

Sarnia Mayor Mike Bradley said a number of those who accidentally wound up in Canada panicked because “they weren’t eligible for entry into Canada.”

Bradley said despite their lack of identification, all American floaters were treated with dignity and were returned to the U.S.

For those who refuse to heed warnings against participating, Kathleen Getty, the deputy superintendent for search-and-rescue programs with the Canadian Coast Guard (CCG), says participants should bring identification and avoid consuming alcohol before or during the event.

“Drinking and swimming don’t mix,” said Getty. “Drinking alcohol can have some very dangerous effects with coordination and judgment. When you’re doing that in the water, it can be extra dangerous.”

Getty also said participants should be aware that the St. Clair River’s waters are cold, adding that anyone considering taking part in the float down should wear a proper-fitting life jacket.

“Understand that the water is very cold, and if you’re in there for a length of time, you do lose mobility and the ability to propel yourself or to stay afloat sometimes.”

The annual Port Huron Floatdown is scheduled for Sunday on the St. Clair River. It’s an event that kept first responders in Sarnia busy two years ago, when 168 people had to be rescued. Sarnia Mayor Mike Bradley is certainly hoping that doesn’t happen again. 7:34

Ontario Provincial Police, RCMP, Sarnia police, Sarnia fire officials and both the Canadian and U.S. Coast Guards will all be on alert during the event.

Due to safety concerns, authorities have also suspended traffic on the St. Clair River for approximately eight hours Sunday to protect floaters.

According to the Port Huron Float Down Facebook page, the event takes approximately two to three hours to complete during good weather, and can take about six hours in “other” weather.

ETFO leader says board responsible for decision on report cards, not teachers