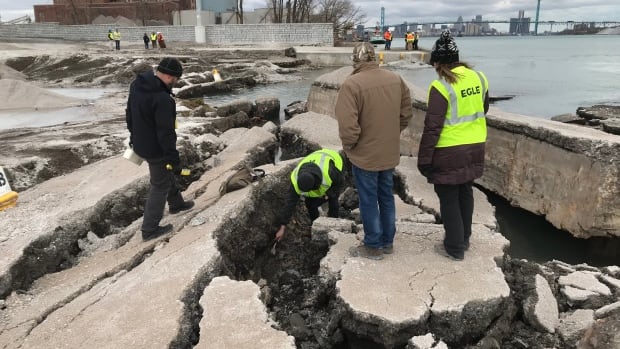 Michigan authorities confirmed on Friday that tests conducted on the soil at the site of a collapsed dock along the Michigan side of the Detroit River showed “no elevated radiation.”

Though the site is currently used by Detroit Bulk Storage to store aggregate material, the location was once owned by the Revere Copper and Brass Company, which produced uranium parts and was a subcontractor for the Manhattan Project.

Staff from the Michigan Department of Environment, Great Lakes and Energy (EGLE) visited the site for a second time on Friday, taking radiation measurements in cracked soil along the Detroit River, ultimately confirming normal radiation levels.

Michigan authorities previously told CBC News that the site’s current owner confirmed the dock collapsed on Nov. 26. However, it wasn’t until recent reporting from the Windsor Star that authorities and the public were made aware of the incident.

In an interview with Afternoon Drive host Jonathan Pinto, Hugh McDiarmid Jr., communications manager for the Michigan Department of Environment, Great Lakes and Energy (EGLE) said the dock collapsed as a result of the weight and volume of “stones and dirt and various materials that was on the riverbank.”

“We think that the weight and volume of that, combined with the high water levels in the river, contributed to an erosion of the riverbank and partially collapsed that piece of land, including some structures that were kind of break walls on the river,” he said.

McDiarmid Jr. confirmed that his agency was first alerted of the collapse by a Windsor Star reporter on Dec. 4 inquiring about the incident.

“It was more than a week before we were aware of it,” he said. “It was unclear whether the company was under an obligation to notify anyone about this or not. We’re looking into that.”

Part of the shoreline on the Michigan side of the Detroit River collapsed and fell into the river last week. It’s causing concerns on both sides of the border because the land was once home to a company that produced uranium parts. Our guest host speaks with Hugh McDiarmid Jr., the communications manager for the Michigan Department of Environment, Great Lakes, and Energy. 7:29

Nonetheless, McDiarmid Jr. said tests conducted at the site “found that all of the levels were actually at or below normal natural background levels for radiation, because there’s always some radiation present in soils and air.”

“We found that there’s no cause for alarm, no excessive levels of radiation, other than what we’d expect to occur naturally there,” he said.

McDiamird Jr. also said that the U.S. Department of Energy and the Environmental Protection Agency “conducted or oversaw a remediation cleanup of [the] site back in the 1980s.”

“They did some testing both in the 80s and then again in the 90s — both of those test results show that there was no excessive radiation there, that it was background levels or below,” he said.

Windsor-based utilities provider Enwin used a series of tweets on Thursday to reassure residents that “this incident is significantly downstream and poses no threat to our drinking water intake located in the Detroit River.”

The Michigan Great Lakes Water Authority (GLWA) used a Friday media release to reassure U.S. residents that the organization “does not believe that there is any danger of this incident impacting water quality.”

The GLWA said it has two raw water intakes in the Detroit River.

“One is located several miles upstream of the Detroit Storage site, a portion of which last week partially collapsed into the river. Because it is upstream of the site, there is no danger of any potential water quality issues from the collapse,” reads an excerpt from the same Friday media release.

The second intake is several miles downstream of the collapsed dock site.

“However, the intake is located on the Canadian side of the Detroit River, and is not in the direct flow stream of the river where the land collapsed.”

Windsor West NDP MP Brian Masse used a letter on Thursday to call on federal Environment Minister Jonathan Wilkinson to call for the launch of a binational investigation to look into the incident.

In his letter, Masse requested that the International Joint Commission — a Canadian-U.S. organization that helps prevent and resolve disputes pertaining to the two counties’ border waters — be made aware of the collapse “and should also be instructed to investigate the situation for both short- and long-term effects on health and environmental concerns.”

Michigan Democratic congresswoman Rashida Tlaib issued a statement on Friday saying that her office has been in contact with the U.S. Environmental Protection Agency (EPA) and the EGLE.

Her statement added that there are “still major unanswered questions about what was spilled into the river when the dock collapsed, what pollutants may have been exposed by the collapse and disturbance of the river bed, and what testing and remediation will take place to ensure the site is safe and that the collapse has not endangered our public health.”

“This afternoon, I sent a letter to both EPA and EGLE requesting additional information of past testing and in-depth information on what health and environmental risks may exist due to the collapse, including any risks to our public drinking water system.”

“In the spirit of transparency and trust, it is imperative that these agencies are as forthcoming and engaging with the public as possible with what is going on and what has occurred. The public deserves nothing less.”

ETFO leader says board responsible for decision on report cards, not teachers