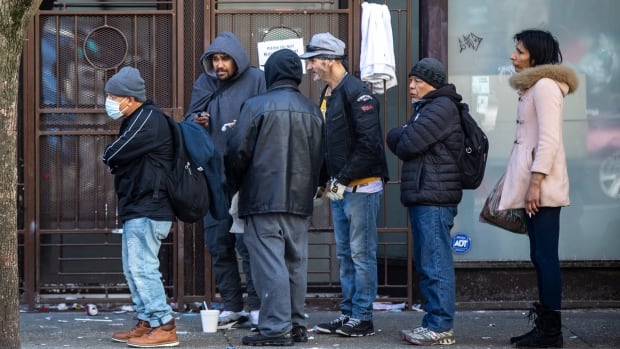 The federal government has given the green light for a safe supply of drugs for Vancouver’s Downtown Eastside residents in light of the COVID-19 crisis, according to Mayor Kennedy Stewart.

“We must tackle the poisoned drug epidemic — something that has already cost us more than 1,000 lives,” said Stewart during a news conference, where a wide variety of measures were announced to help residents of the Downtown Eastside from contracting or spreading the illness linked to the novel coronavirus.

“The federal government has taken all measures required for this to be operational,” said Stewart. “Now we’re just waiting for the provincial guidelines.”

The safe supply of pharmaceutical drugs would be focused on the 20 to 30 per cent of users in the community not already connected with health-care providers and existing safe injection sites, Stewart said.

B.C.’s chief medical health officer Dr. Bonnie Henry has called for a safer supply of drugs for more than a year, saying it would allow drug users to “seek help without the fear of being charged criminally.”

On Wednesday, she expressed her support for the federal government’s decision.

“It’s an important piece to ensure we can help support those people as best we can … to ensure that they’re able to comply with our public health advice around isolation or quarantine,” she said.

The provincial and federal governments have not provided details yet on the timeline or specifics of what the new policy will entail.

Vancouver also announced that the Coal Harbour and the Roundhouse community centres have been turned into referral-only shelter spaces for DTES residents who cannot safely shelter in place, or should they develop COVID-19 symptoms.

The centres will house approximately 140 people, with social-distancing measures being enforced and extra precautions for people with COVID-19 who do not require hospitalization.

In addition, all public access and washrooms at three of the neighbourhood’s community centres — Carnegie, Gathering Place and Evelyne Saller — have now been closed, though they will still offer food services for takeout meals.

Seven portable washrooms and 11 handwashing stations have been set up in the Downtown Eastside, and the city says it has more on the way.

Vancouver has also begun taking over hotel space so that anyone with COVID-19 symptoms who cannot self-isolate has adequate shelter.

While there has not yet been a confirmed case of COVID-19 among the Downtown Eastside’s homeless population, the city and province have expressed concern, because many of the neighbourhood’s residents have underlying health issues and enforcing social distancing on Hastings and Cordova streets in particular can be a challenge.

In order to minimize risk, Vancouver Coastal Health chief medical health officer Dr. Patricia Daly said it is important for people to presume the virus is already within any community in B.C.

“I want to be clear: It is circulating.… [But] it’s how we act to minimize the risk,” she said.

Daly said local health staff are making the necessary precautions to help those living on the Downtown Eastside, including opening a warehouse, so that non-profit organizations in the area have access to the supplies they need to avoid spreading the virus.

“For almost all healthy adults, they recover at home, the symptoms are quite mild,” she said. “It’s a certain high-risk population … in whom it could be more severe, and might require a trip to hospital. Our focus is avoiding spread to those vulnerable populations.”

Unlike the rest of municipalities in B.C., the City of Vancouver can still issue new orders under its state of emergency, but may only do so with the express permission of the provincial government.

It means the city’s own fines for disobeying public health orders are still in place — up to $1,000 for individuals and $50,000 for businesses. But thus far the city says it hasn’t issued any.

“The compliance rate has been very, very high,” said Stewart. “We have daily reports as to what’s happening with the public and we are satisfied at this point.”

If you have a COVID-19-related story we should pursue that affects British Columbians, please email us at impact@cbc.ca.