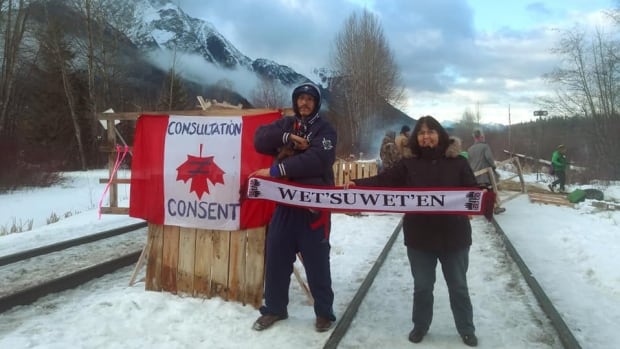 A rail blockade of CN Rail’s main line in northern B.C. is coming down after a Gitxsan hereditary chief said both B.C. and Canada have agreed to meet.

Supporters of the Wet’suwet’en hereditary chiefs who oppose the Coastal GasLink pipeline project have been blocking the track near New Hazelton since Saturday afternoon, halting transport between Prince George and Prince Rupert.

In turn, Chief Spookw said they will remove the blockade on the CN Rail tracks in New Hazelton.

“The end thing here is still to try to resolve this. This isn’t resolved. I’ve moved this camp on this site. I’ve removed this blockade. That was my agreement. Take this blockade down and they will come to the meeting,” said Spookw.

However, that does not guarantee there won’t be blockades set up on other parts of the railway line.

Currently, supporters at the blockade are removing their belongings, he said.

“CN can come and take down any wood obstacles. That’s not my problem.”

The natural gas pipeline project was approved by the province and 20 First Nation band councils signed agreements in support of the project, including five of the six band councils in the Wet’suwet’en Nation.

However, Chief Spookw and some of the other hereditary chiefs argue that the band councils don’t have authority to make decisions about traditional Wet’suwet’en land.

He said some of the supporters of the hereditary chiefs at the New Hazelton blockade don’t want it to come down.

“They want it to stay. They wanted to keep fighting. But as in any war, we have this battle. We’ve put pressure on the main artery of the economy of B.C.. We’ve put pressure on, and now we’ll release that pressure and they can breathe. We’ll step back for a little pause here so that we can have some high level talks nation to nation,” he said.

The hereditary chief says he would ideally like to have Premier Horgan or Prime Minister Trudeau come meet him in person.

“They come here and they make their concessions. They tell us what they’re willing to do to correct this. Otherwise this can continue indefinitely,” he said.