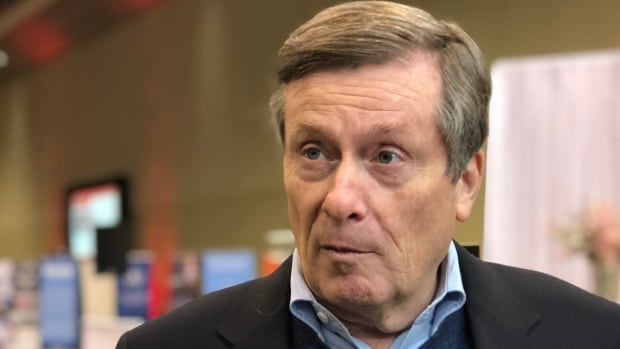 Mayor John Tory says his proposal to increase property taxes is needed in the face of Toronto’s “disproportionate burden” to provide services to residents across the GTA.

Tory made the pitch before Wednesday’s meeting of Toronto’s executive council, where he submitted a letter calling for councillors to support his plan.

“We need billions, not millions,” Tory told reporters before the meeting. “I’m absolutely confident it’s the right thing to do.”

The proposal would see property taxes rise by one per cent in 2020, and an additional 1.5 per cent annually until 2025.

It is the first time Tory has endorsed significant property tax increases during his five year mayoralty, which has recently been marked by an increasingly volatile relationship with the provincial government.

“We cannot lament the current political climate as a reason for inaction in our city,” he wrote in the letter.

Tory has written this letter to members of his executive committee regarding the City Building Fund, stressing that it’s become “clear” the city needs to “invest in our future.” The city can’t wait for potential road tolls or extra gas tax funding denied by the province, he adds. <a href=”https://t.co/6Qqdq0mIiM”>pic.twitter.com/6Qqdq0mIiM</a>

Tory says Toronto’s disproportionately large role in the GTA justifies and necessitates the tax hike, and he cited a range of new statistics to make his argument.

Non-Toronto residents account for nearly 40 per cent of all traffic on the Gardiner and Don Valley Expressways, Tory said. Thirteen per cent of all TTC trips begin and end outside city boundaries, he added, yet Toronto pays the full cost to maintain both its roads and transit system.

“Toronto has taken on, and continues to take on an outsize role in the region, bearing a disproportionate burden for a number of services including public housing, transit, transportation and social services,” he said.

Tory’s office says the tax increase would generate $6.6 billion in additional revenue, which Toronto will invest directly into affordable housing and the TTC.

Around $5 billion is earmarked for transit, including the purchase of new subway cars and streetcars, maintenance and upgrades.

The recommendations were adopted by the executive council and will be considered by the full city council on Dec. 17.

How airports are screening for the coronavirus

Man arrested in death of woman in Scarborough apartment fire