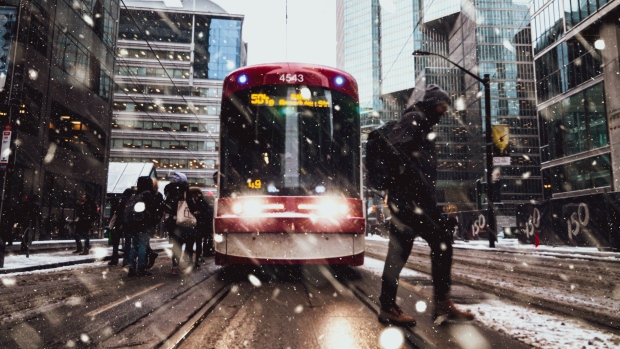 TORONTO — Some messy weather in Toronto is creating slick conditions on the roads this morning.

A winter weather travel advisory is in effect for the GTA and much of southern Ontario today and Environment Canada says between five and 10 centimetres of snowfall is expected throughout the morning.

The heaviest accumulation will come between 5 a.m. and 9 a.m. and the snow will taper off this afternoon.

“The snow may become heavy at times resulting in reduced visibility,” Environment Canada said in its weather advisory. “The morning commute will likely be impacted and motorists are advised to exercise caution and alter their travel plans as needed.”

GO Transit says the slippery conditions are slowing down GO buses and riders should expect their trips to run about 15 to 20 minutes longer as a result, Metrolinx spokesperson Anne Marie Aikins wrote on Twitter.

“We’ve got about three dozen happening right now. We’ve probably got about 100 crashes already since this system really began from the overnight hours. So it has been a very busy morning,” he told CP24.

“We are going from call to call to call. If you can stay home, this is the day to do that. Wait for the system to pass. Let the snow plows and salters do their job and highways will be in much better shape later on today.”

Environment Canada is calling for a high of 4 C in Toronto today and more mild temperatures are on the way.

Periods of rain or snow are in the forecast for Toronto on Tuesday along with a high of 5 C and Wednesday will see a high of 3 C and more snow or rain.