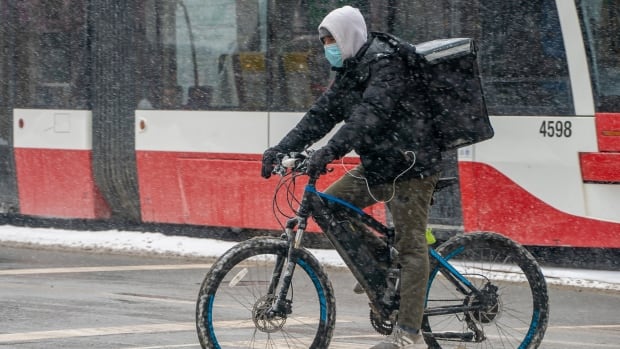 After finishing cleanup on Thursday following several straight days of snowfall, city crews say they’re preparing for an additional 10 to 15 centimetres of snow expected to blanket Toronto by Friday morning.

“We’ve been planning. While the snow was falling from the last storm, we started watching the forecast and planning for this one, trying to understand when the snow might fall, when it might come,” Eric Holmes, spokesperson for the City of Toronto, told CBC Toronto on Thursday.

“We’re preparing for a long haul.”

“Accumulating snow could cause poor driving conditions, and impact the commute this evening and Friday morning,” reads the advisory, which was issued just before 5 p.m. on Thursday.

The warning is in effect for portions of the Greater Toronto Area, particularly downtown Toronto, southern Etobicoke, Mississauga, Milton, and Oakville.

The weather agency said that includes sections of the following highways:

“Drivers should plan to give themselves extra time to reach their destination,” the advisory reads.

“Visibility is reduced while driving, slow down, watch for tail lights ahead and be prepared to stop.”