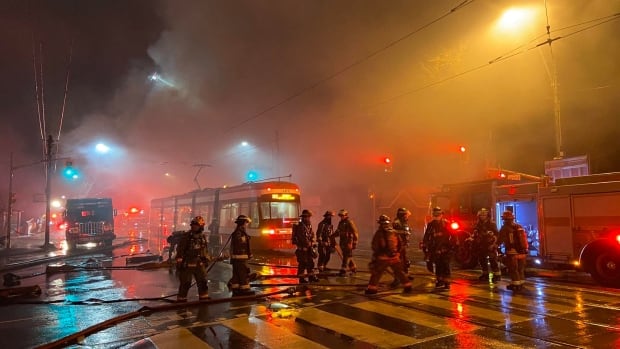 Toronto Fire says about 80 firefighters are attending a blaze at an abandoned building that has been upgraded to a fourth-alarm in the area of Dundas Street West and Sterling Road after a fire broke out Sunday night.

Fire Chief Matthew Pegg said that the fire is “difficult and challenging defensive fire,” causing them to upgrade the blaze’s status from three-alarm to four-alarm.

They say they were called to the scene at around 6:30 p.m. and they believe the fire is coming from an old tool rental building in the area. The building is at 1875 Dundas Street West and is owned by Metrolinx, said Ana Bailão, the deputy mayor of Toronto on Twitter. She said it was purchased for the rail corridor expansion and it was set to be demolished soon.

Firefighters are taking a “defensive approach” to battling the flames and the building has been compromised, they said. There’s lots of smoke in the area but there are no injuries reported, said Toronto Fire.

The building occupies one storey on the road and then drops another two stories to the Metrolinx tracks below.

As a result, Metrolinx has stopped trains from running in the area due to the fire. Train service to Barrie has been completely halted, said Anne Marie Aikins, a spokesperson for Metrolinx on Twitter.

The Union Pearson Express train to Toronto Pearson International Airport has also been paused in both directions and express busses are running instead, Metrolinx tweeted.

Toronto Police area asking the public to avoid the area so emergency services can put out the fire.

Dundas and sterling streets <a href=”https://t.co/h6a1yCnho9″>pic.twitter.com/h6a1yCnho9</a>