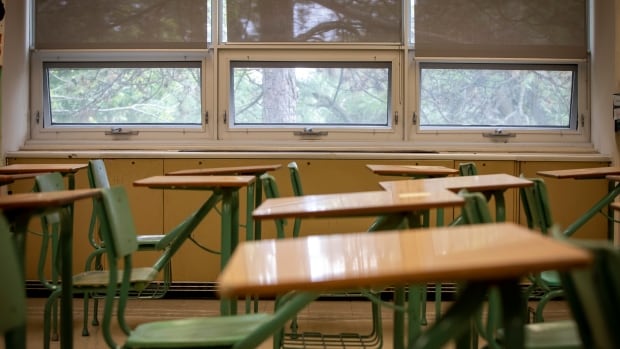 A Toronto Catholic elementary school with 11 COVID-19 cases has been temporarily shut down on the recommendation of public health officials.

The Toronto Catholic District School Board says St. Francis Xavier school will be “temporarily dismissed” until further notice due to an “ongoing COVID-19 investigation.”

The city’s public health unit says it recommended the closure and will keep the community informed when a reopening date has been set.

The board’s website lists 11 active cases at the school, with the first infection confirmed late last month and the most recent over the weekend.

The cases are made up of eight students and three staff, according to Shazia Vlahos, the chief of communications for the Toronto Catholic District School Board. She said it’s not yet clear if there was transmission within the school.

“At this time, we have not been told that there’s been any outbreak in the school,” she said.

“We are hopeful that students and staff can return to the school next week. However, we know that will be contingent on the investigation that Toronto Public Health is doing.”

All parents and staff have been informed about the closure, Vlahos said.

Vlahos added the school plans to have testing available for staff and students to ensure that they can safely return. In the meantime, students will be moving to online learning, she said.

Toronto Public Health has not released information about whether variants of concern were among the cases.

The latest provincial data shows 734 of Ontario’s more than 4,800 schools are reporting at least one case of COVID-19, and 30 schools are currently closed due to outbreaks. St. Francis Xavier is the only school in the Toronto Catholic District School Board that is closed.

Toronto has administered 206,922 vaccine doses as of Tuesday.