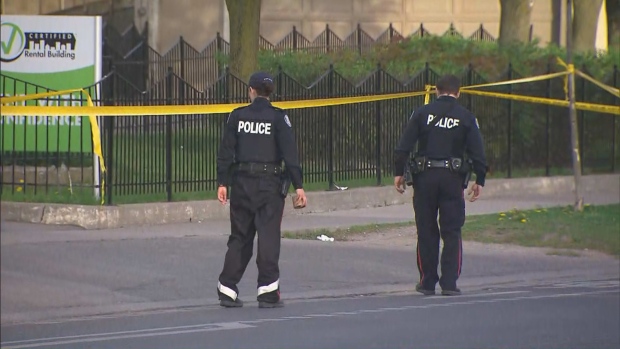 TORONTO — Two teenagers are in hospital after a shooting in Thorncliffe Park Saturday afternoon.

Emergency crews were called to a park near Thorncliffe Park Drive and Overlea Boulevard at around 5:30 p.m. for reports of shots fired.

Both victims were transported to a hospital with non-life threatening injuries.

“It happened in the park here between the two schools,” Davis said. “Then, the victims run from there. It’s a bit of a moving scene.”

She said one person was taken into custody in relation to the firearm recovered at the scene. However, Davis said it is not known if it is related to the shooting.

“There are callers that indicate that two males were shooting at each other. Now whether or not that’s the two victims or that the victims were caught in the crossfire, that’s what we need the video, and we need the public to come forward and let us know,” she said.

Davis said they have obtained a video from where the victims were located, but they would like to see the video from the school to get a clearer picture of what occurred.

She said they don’t have anyone in custody right now in connection with the shooting.

Anyone with information is asked to contact police or Crime Stoppers.