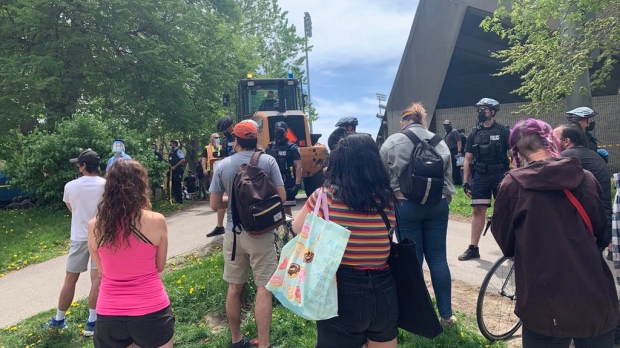 TORONTO — Tensions have flared as the City of Toronto clears out a large homeless encampment.

Those living in tents at the site, along with dozens of supporters, are shouting at police officers who in turn have threatened them with arrest.

Several dozen City of Toronto security officers arrived this morning to clear the encampment at Lamport Stadium Park, which sprouted up along with dozens of other sites when the pandemic hit last March.

Shortly thereafter about 20 police officers arrived and surrounded the tent of a woman who agreed to move to a hotel, but several others living at the site say they do not want to leave.

The city says encampments are not safe and camping in parks are not permitted.

This report by The Canadian Press was first published May 19, 2021.